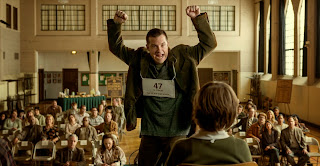 Those who read the title would think this film would have a copious amount of bad words, however, it was no Wolf of Wall Street.

There was not a scene of Jonah Hill choking on chunk of ham lodge in his meaty throat any where to be found.

Or many prostitutes... but that goes unseen.

Despite this film not being directed by Martin Scorsese, it has it's fair share of "bad words." I put "bad words" in parenthesis because it was more like hearing really crude phrases for about an hour and a half.

In his directorial debut, Jason Bateman does a decent job juggling between being the man behind the scenes and starring as the leading role. Working with Andrew Dodge, who is specifically known for this film; they both work to create a plot line that is memorable but lacks something important. It's like when you're talking to your biggest crush, you're telling a joke, and you forget the punchline. So, instead, you keep rambling like a baboon, and hope whatever is coming out of your mouth makes some sense.

Bateman and Dodge do a fine job in not making a terrible movie. And for that, we commend them.

It is incredibly easy to make a terrible movie, but it takes effort in making a film that is indifferent.

To make a distinction, this was not a bad film. However, It would be wiser to spend money on actual needs. Like grocery shopping, filling up your vehicle with gas, and paying your secret lover to keep quiet about the affair...

You know, the essentials.

This film lacked a key aspect that all successful comedies need to be recognized for their excellence. Bad Words lacked heart. I felt absolutely zero sympathy for the main character, Guy Trilby, a 40 year old man who enters himself into a national spelling bee despite the objections of a bunch of nerdy kids and their furious parental guidances.

With a decent plot, the film could have spread it's luscious comedy wings and flown it's way into the audiences hearts, but it fell flat. The writing was led astray, and it should have had a stronger ending. Without spoiling anything, Guy Trilby deserved a better ending. An ending that would make the audience say actual bad words.

To be honest, I've said worse words driving on 75 to Dallas, so I expected a little more.

However, there were some aspects of this movie that I enjoyed.

That list is about it. All of the jokes seemed incredibly forced and childish. The childish part could symbolize something in this film, but I'm certainly not writing an English paper. So, I'll keep out all of the symbolism along the lines of the curtains being blue, and how it actually means something meaningful.

For what it was, the movie was enjoyable. There were a few laughs in the right places, and the story is pretty interesting.

All in all, Bad Words is a decent date flick if he or she isn't offended by the constant use of the word "vagina" and Indian stereotypes.

At least see the film if you personally enjoy Jason Bateman. Thankfully, there is some nice closeup shots of his perfectly sculpted zygomas.

Live Long and Prosper Always From,