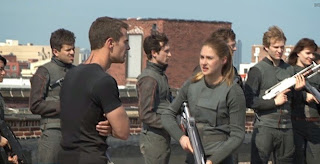 Another YA (Young Adult) adaptation is upon us. Is this one good like a Hunger Games or Harry Potter? Or is it bad like everything else? It's in the middle for me. Let's break this down. The directing for this film I thought was very good. The tone throughout the film was dark and triumphant at the same time. It was interesting and I really dug it. Some scenes I had my mouth dropped because I didn't expect the dark turn and some scenes I was rooting for the main character. I think whenever the director can make you fell multiple emotions in the span of the story then he has done his job. Some of the deaths scenes I thought were handled poorly and some the actors were bad. So the director was good with the tone and feel with it but couldn't execute important scenes and direct some actors. The acting was good from some and weak from other. Shailene Woodley did a good job as the lead and I am convinced she can carrying a film by herself. Miles Teller is in this and he did a great job. I thought the love interest of Shailene was poor. He was just another typical model looking actor with wooden deliveries. And not to mention the love scene between them. It reeked of Twilight and every other bad YA film. Granted I have never read the books but still...they all have either a love triangle or a cheesy "love" scene. Anyways besides him I thought everyone else did a good job. Kate Winslet plays the bad woman in it and she does great all the way until the end. Kate Winslet I am sorry but you can't pull off a fight scene. The cinematography is action packed and the camera is always moving to keep up with the pace of the characters. They are always moving and I really liked it. It was almost like a constant frantic pace just like the main character was throughout the film. My favorite scenes shot were the dream scenes. I thought those were lit and shot well and felt really different from the rest of the film. The movie is over two hours long and you can definitely feel it but the concept of this movie of this movie kept my attention and I wanted to know more. I am not the target audience for this. I enjoyed it and it definitely was not the worst YA adaptation but also not the best. I want to see it expand and I hope they make the next books but fix the problems I mentioned and you will have a better sequel...kind of like Hunger Games: Catching Fire. 6/10
(Review by Chase Lee)