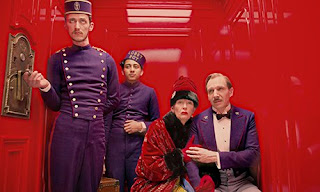 Wes Anderson, at this point, has a cult following and every movie he comes out with is like an event. Was this one good? This is my favorite film of the year so far and I believe this will be everyone's favorite Wes Anderson film. At least it was for me. Wes Anderson creates another film where the cinematography, art direction, characters and dialogue are simply unique and intriguing to watch. The directing in this, like most of his films, is upbeat and makes you curious as to what will happen next. The style of Wes Anderson's directing is something no one can imitate. He has his own brand and it works in this one. The story is like a murder mystery, dark caper which something he has never really dabbed in before. This was so different from what Wes does that I think this certain tone and story worked the best with his style. The acting is quirky but I loved it. Every character was unique and vastly different from each other. This cast is stacked as usual with such names as: Ralph Fiennes, Owen Wilson, Bill Murray, Tilda Swinton, Edward Norton, Adrien Brody and a very funny performance from Willem Dafoe and that's just scratching the surface. Everyone does fantastic. The cinematography is gorgeous to look because it is meticulously framed and filled enough of colorful eye candy to make your head explode. Every film of his has amazing cinematography and this is no different. The film is an hour and forty minutes long and it's perfectly edited and flies by and you didn't even know time flew by. This is a different tone for Wes but I think he pulls it off it what will soon be a classic for Mr. Anderson. This is the frontrunner for best movie of the year so far for me. If you like Wes Anderson you will love this one and if you haven't seen a Wes Anderson movie before I think you will be pleasantly surprised. 8.5/10
(Review by Chase Lee)