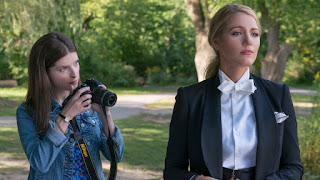 In “A Simple Favor,” the reason this one works is because the characters are so likable and intriguing. Anna Kendrick is Stephanie Sommers, a mommy blogger who befriends fellow mother Blake Lively’s Emily Nelson and gets wrapped up in a whodunit of sorts. The intrigue almost occurs at the beginning, wherein the favor of picking up Nelson’s son from day care turns into a giant spectacle for everyone involved.

“A Simple Favor” comes from director Paul Feig, who handled directing chores n the 2015 reboot of “Ghostbusters” as well as “Spy” with Melissa McCarthy. All of that is the past, since what he has done here contains one of the better plot twists of recent memory in that they are actually surprising and noteworthy.

Forget recent entries like filmmaker David Fincher’s 2014’s “Gone Girl” or anything from Brian De Palma has tackled recently because Feig, working from a non-fiction novel by Darcy Bell and writer Jessica Shazer, “A Simple Favor” does a great job of making a gem intriguing as all get out.

What is also amusing is the politics of signing up for anything at the school. Stephanie sometimes gets into trouble for too much volunteering. The other adult parents at the school look at her not so much with evil eyes rather “what now?” glances.

As the spouse, Henry Golding of “Crazy Rich Asians” is intriguing as Stuart Townsend, a teacher who gets mixed up in all the lies orchestrated by his wife Emily and Stephanie. He looks and appears baffled by the shenanigans that are thrown into his lap.

“A Simple Favor” does more left turns than a bonky twisted pretzel. The viewer almost gets settled in, but as aforementioned, Feig chooses another direction and road to take the viewers down.

The story threads and tales are in abundance here, always veering from one change and shift in story angle to another. The one thing Emily does not like is having her picture taken in any capacity. When Stephanie snaps a picture, Emily tells her to delete it. She complies, not questioning her, but does it for the shake of their friendship.

“A Simple Favor” does what it’s supposed to do in having viewers leave with a satisfied palate and smiles galore.