The House With a Clock in its Walls 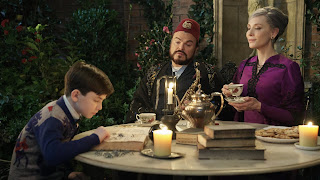 Jack Black is always watchable, even going back to Tim Burton’s “Mars Attacks!” in 1996. He was the gung-ho soldier of the family who met an untimely exit when his character was in Washington D.C. meeting the aliens from Mars.

Now, he has the lead in director Eli Roth’s “House With a Clock in Its Walls.” Roth has ventured into an arena I never thought he would go: a fun family film with some nifty horror splashes.

This one finds his Jack Black’s Jonathan Barnavelt playing uncle to nephew Lewis Barnavelt (Owen Vaccaro). Whose mother passed away recently. Since he was part of the family tree, he was sent to live with his uncle.

Lewis is kind of an oddball kid, like the one who always gets picked last in gym class. Also contained in the family is Cate Blanchett’s Florence Zimmerman, who Jonathan claims is a close platonic friend.

Amusing to the proceedings is a group of monsters, where even the actors just say “Creepy.” They are ominous puppets, mannequins and the like that are just spooky and altogether eerie.

Also involved is Kyle McLaughlin’s Isaac Izard, who used to be a best friend to Jonathan before he ventured off to war. When he returned, his character was drawn to the dark side, which put Jonathan in quite the quandary.

The house essentially is a magic house. Think rather hard to a 2007 fun fantasy film titled “Mr. Magorium’s Wonder Emporium” with Dustin Hoffman and Natalie Portman.

I interviewed him for that particular title, and like the fan boy I am, I brought my collection of titles he was in, including his turn as one of the bad guys in 1997’s “The Jackal,” wherein he supplies a heavy duty machine gun to Bruce Willis’s baddie, “The Jackal” of the title.

As aforementioned, this movie was as lot of fun and will hopefully spawn a bunch of sequels and follow-ups. I’m sorry, but I think Jack Black’s Poe in “The Kung-Fu Panda” franchise has run its course.

So readers know, Black recently received a star on the Hollywood Walk of Fame, a tourist attraction in Los Angeles, CA.

Email ThisBlogThis!Share to TwitterShare to FacebookShare to Pinterest
Labels: Ricky Miller, The House With a Clock in its Walls reviews