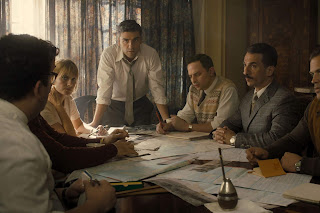 To me personally, watching a movie is like picking out your nightly meal. You know you will be watching something, but you are not sure how it will turn out in the end.

That is why I know what I’m getting into when watching something about the Holocaust or anything related to either World War I or II. “Operation Finale” delves into the latter, wherein Oscar Isaac’s Peter Malkin must face one of the most despicable villains of World War II in Ben Kingsley’s Adolph Eichmann, one of the partial instigators of eradication of countless individuals of Jewish descent from the world.

Both Isaac and Kingsley have very strange resumes when looking back on their past work. With Isaac, it is him playing both the hero (“Star Wars: A New Hope,” “Inside Llewyn Davis”) as well as the despicable baddie (“Sucker Punch,” “Ex Machina”). The same can be said for Kingsley, who won a Best Actor Oscar for his work in director Richard Attenborough’s “Gandhi” in 1982.

Since then, Kingsley has played in a plethora of flicks, namely Steven Spielberg’s multiple Oscar-winning 1993 release of “Schindler’s List,” “Sexy Beast,” “House of Sand and Fog” and Martin Scorsese’s multiple Oscar-winning “Hugo” in 2012. His send back to sender includes duds such as “BloodRayne,” “Species,” Ray Bradbury’s “A Sound of Thunder” and last year’s abysmal “Collide.”

“Operation Finale,” however, is about bringing justice to all of those individuals who were extinguished during the war itself. Like the aforementioned “Schindler’s List,” the movie is a tough watch. Although it is graphic in spots, director Chris Weitz knows where to place the camera and set ups for the perfect lingering detail.

Nick Kroll from FX’s “The League” takes an odd career shift since he does not spout one-liners or off color commentary. Also part of the varied ensemble is Mélanie Laurent, who was also in Quentin Tarantino’s gritty WWII action-drama “Inglorious Bastards” in 2009, provides the necessary support to bounce back friendly dialogue with Isaac’s Malkin, since earlier in their lives they had a shared history.

The shifts that occur within the story are a bit hard to digest since one sees images of his sister that was lost during the war. One almost feels like they are a double-take of what actually occurred.

What was nice to see is that promises made earlier in the story are actually kept. At one point in the structure, Malkin promised Eichmann that he would see his wife again before he passed.

A solidly acted ensemble all around, “Operation Finale” is worth the full price of admission, but be warned it is a tough watch in spots.

Sure, portions of the movie are predictable, but they are just used as earmarks for the entire ensemble. As much as I hate to say it, a copy of this movie will not be going into my collection at home.

I liked it and respected it, but I think if I owned a copy it would be collecting dust just like my unopened copy of “Schindler’s List.” Both are too heartbreaking to watch again.

Posted by Dallas Movie Screenings at 10:08 AM