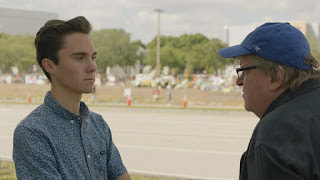 I like and respect documentaries. One of my absolute favorites came in 1988 with Errol Moriss’s “The Thin Blue Line,” the story of Randall Adams, a wrongfully convicted man serving a life sentence on Death Row for a crime he did not commit. He was released in 1989, becoming a proponent of wrongfully jailed prisoners. Adams died in 2010.

Too bad the usually great documentary filmmaker Michael Moore dropped the ball on this one. I usually agree and concur with his matter-of fact tone that equates to simple common sense.

“Fahrenheit 11/9” also lacks focus, since it was supposed about Trump but delves into the water crisis in Flint, Michigan and the fact the residents were getting sick from lead tainted water, mass shootings, gun control and both political parties.

“Fahrenheit 11/9,” also looks at how people need to go out and support our country by continuing to raise the stakes at a local level and make a change by getting people to just go out and vote.

“Fahrenheit 11/9” traces Moore’s take on the presidency of Donald J. Trump, which as of current writing is just about half over in his four-year term. He tells how Trump brags about his success and feels he should just get re-elected and brings F.D.R. into the forefront, because he thinks he is doing such a great job and he’s the best at it, hands down.

Also interwoven into the story are comparisons of Trump to Adolf Hitler and his slow rise to power that quickly became Germany’s new normal.

Moore also tells how Trump mentions how much he likes the display that goes into the pageantry of leaders such as Kim Jong Un, and how he wants the same for our country (himself). He does not realize that he is admiring a dictator, something Trump does not even bother to think about or even fathom. Honestly, Trump just likes the spectacle and showmanship when it comes to certain ideas and such.

In this movie, Moore sees Trump as the ultimate evil in the world. Moore obviously does not like Trump in any structure or capacity. Moore pinpoints Trump’s bravura and hype as a man who always think he’s doing a great job.

As a filmmaker and documentarian, Moore sometimes strays from his topic and main focus. Unlike the great Oscar-winning “Bowling For Columbine” (2002) or the highly successful “Fahrenheit 9/11,” (2014), he does not know exactly where to steer the conclusion on this documentary.

From his catalog of stories and tales, I would probably put this one in the passable yet disappointed field of just sheer letdowns. Unlike the intriguing 1997’s “The Big One” or the so-so “Where to Invade Next” from a couple of years back, this one just putters out along the road and does not really end with an adequate resolve by movie’s end.

My personal opinion and belief is moot, since I’m just a lowly Entertainment Editor, who just covers the movie world and not much else.