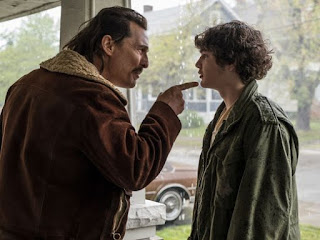 One thing 1984 Detroit conveys in this film is that it was horrible year for fashion. Filmed in dark tones to highlight the once booming city now on the decline with deteriorating neighborhoods, filled with unsympathetic characters who can't catch a break and more unpleasantly knowing it is all based on the true story. Directed by Yann Demange and written by Andy Weiss, and Logan and Noah Miller, it tells the unfortunate story of Richard Wershe Jr. who was given a life sentence for dealing cocaine and being an FBI informant at the age of 17.

Richie Merritt in his debut role plays White Boy Rick who at the age of 14 is asked by the FBI to make some "controlled" purchases of crack so they can obtain intel to make busts in exchange for not arresting his father. Rick Sr. (Matthew McConaughey) is a bit of a hustler selling guns from his home or the back of this car. He has big dreams of opening a video store. His older sister Dawn (Bel Powley) leaves home to move in with her no good boyfriend who beats her and gets hooked on crack. Rick's best friend Boo (RJ Cyler) is brother to the twins Johnny (Johnathan Majors) and Leo (YG) who deal in cocaine. Because of his friendship with Boo, they take him under their wing. Rick is seduced by the fancy clothes and lifestyle. With the money he's earning from the feds, he is soon buying gold chains and fancier clothes. His dad finds Rick's stash of ill gotten cash under his bed in a shoe box. Despite his trepidation the Rick Sr can't seem to stop his son.

It doesn't take long before greed takes over as alternatives in their loser lives offer no ready solutions. Rick earns his nickname by being the only white boy in the gang. The story glosses over the true life fact that high school drop out Rick was already exhibiting criminal behavior. The FBI's using him to sell cocaine to make their busts, while he pockets the profits seems disingenuous. Especially when he ultimately gets busted and then they get him to rope in bigger fish by letting him think he will get a lighter sentence. The feds using a minor to do all these drug sales and buys are most likely illegal. The real life Rick didn't get parole until 2017 when the movie was being made.

McConaughey is as committed to his role as the father who despite all his failed plans in life remains a guy who sees the glass as half full. Newcomer Richie Merritt looks remarkably like the real life Rick gives a more nuanced performance as a young man whose child like innocence is jaded by the flashy lifestyle of his friends. Bruce Dern and Piper Laurie as the grandparents who live next door offer lighthearted moments in the family dynamic. There are no heroes in this and the jumbled story doesn't really allow any real reason why we had to time travel to the 80's outside of the injustice of it all.
(Review by reesa)