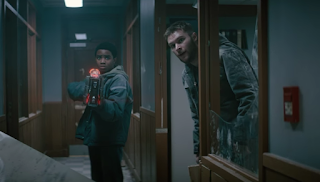 “Kin” has a few moments of brilliance, but as with all science fiction movies of late, it just runs out of steam somewhere along the way.
There is something very positive to say in that the brother duo of Josh and Jonathan Baker have crafted quite the intriguing tale of two brothers coming to terms with each other amidst a backdrop that knows no time or place. In looking back on each of their resumes, neither has done a stand-alone feature.

For comparisons sake, the easiest movie I can reference is Walter Hill’s little seen release of 1984’s “Streets of Fire.” It was a period wherein there is no direct reference to anything pop culture based, rather a period where taxis existed but cell phones did not.

Dennis Quaid is solid as the caring father of sons Jimmy (Jack Reynor) and Eli Sobinski (newcomer Myles Truitt). Jimmy is an ex-con trying to get back on the straight and narrow. Eli is a fourteen year old kid who finds a giant alien ray gun while looking for metal scraps to sell to buyers.

The trouble with the movie is it rests on the fact that his character perishes way too soon in the movie’s structure.

Leading the way as the antagonist of the story is James Franco as a drug dealer named Taylor Balk. I only bring this up because he’s played this kind of character before, namely the Sylvester Stallone-scripted “Homefront” with friend and colleague Jason Statham.

Eli receives a lecture from his father, Quaid’s Hal, about taking other people’s property. The fact the metal scraps came out of somebody else’s pocketbook.

Zoe Kravitz, who appeared from one of the best movies in the past decade, 2015’s “Mad Max: Fury Road” stars in “Kin” as Milly, a mistreated exotic dancer. She strikes up a friendship with both Jimmy and Eli, who are some of the last customers she will ever dance for.

Going back to the acting appearances, Reynor has been around for years, with appearances in “Transformers: The Age of Extinction,” “Free Fire,” “ 2015’s “Macbeth” and one of the most underrated movies from the past couple of years, 2016’s “Sing Street.”

Although “Kin” is not necessarily a great movie, it does something that I want more of. Along with directors such as Brad Bird, Christopher Nolan and even Guillermo Del Toro, I’m very intrigued to see what the pair tackles next.

Posted by Dallas Movie Screenings at 10:20 AM