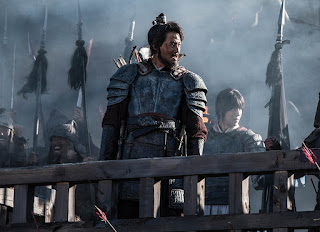 This truly epic historic film directed by Kim Kwang-Sik about the Ansi Fortress siege will surely stand up to the Game of Thrones and Lord of the Rings battles. It's filled with heroic characters and evil villainous opponents. The movie doesn't stand still for a second, keeping one at the edge of the seats. The sweeping score, costumes, locations, cinematography and acting are all breathtaking while running over 2 hours of CGI crazy mayhem and slo-mo fighting. It's the kind of movie that would work well in wide release, but unfortunately it's only open in a couple of theaters in the DFW area.

The time is about 600 AD during the Tang dynasty of China. The Emperor Taizong (Park Sung-Woong) is set on conquering the ancient Korean peninsula known as Goguryeo. The Tang troops number over 200,000 foot soldiers, archers and cavalry facing the 150,000 Goguryeo troops lead by General Yeon (Yu Oh-seong). In the end of the opening sequence only 10,000 are left in Yeon's army. He believes if his rival Ansi Fortress Commander Yang (Jo In-sung) had responded to his call for battle, they would have prevailed. Yeon sends cadet Samul (Nam Joo-Hyuk) on a secret mission to assassinate Yang. Samul is from Ansi, although the last of his Eulbul clan. He tries to convince them he's come back to fight at their side. What he finds in his old home town is a love and respect the citizens have for the commander.

Emperor Taizong believes he can easily take the border Ansi fortress with no problem. After all the village is considered traitors and they are no match for the Tang forces. Despite his huge army, he receives unexpected resistance from Ansi's 5000 warriors fighting from their almost indestructible fortifications made of rock and dirt. Yang knows that Samul had been sent to kill him, but tells him to wait until after the upcoming battle. He decides to make Samul his flagman who must stick to his side. Yang gives a great pep talk to his people that they are fighting for their families and their country. Meanwhile Taizong tells his troops they can rape and pillage when they win. The battle has everything from catapults hurling boulders to knock down the walls, archers filling the sky with arrows raining down, ladders to climb the walls, all the while Ansi is well prepared to fend their attackers. Even when they breach the gate, the Tang army was surprised by what waited for them inside. Taizong retreats and his advisers suggest they build a mountain of dirt to match the height of the fortress walls. The months long construction gives each army time to get ready.

There is nice character development with a bit of romance, friendship, betrayal and sacrifice. The battle scenes don't shirk from violent dismemberment, fiery wagon wheels, and fire arrows igniting oil. Sure some of the story line doesn't have too many surprises falling on expected tropes. But it sucks you into caring about the people and rooting for them to win. The Ansi siege is a little known piece of Korean history and hopefully this film will bring it some recognition.
(Review by reesa)


The Great Battle opens at the AMC Grapevine and Bluebonnet Cinema