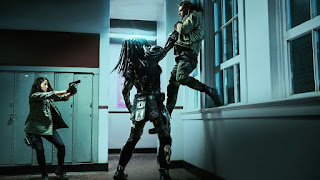 *** (out of ****)
Like 1987’s Predator, this fourth film in the unlikely franchise – following the first sequel in 1990 and 2010’s Predators (both unseen by me), not to mention the two crossovers with the Alien series – works because it delivers what it promised us. Those promises are, to be fair, low-hanging fruit for anyone who might yearn for the relative simplicity of the first film, which was roughly as simple as high-concept action pictures from that era got: There was a quick introduction to the characters, a plot set-up, and a lot of gory, well-choreographed violence as the payoff.

For a movie about an alien hunting humans for sport, it worked pretty well within those simple guidelines, and The Predator works for the same reasons, though the screenplay does overextend in a couple of areas. First, there is a lot of exposition in this plot set-up, explaining the properties of the eponymous extraterrestrial, the reasons why a second, much bigger one might have shown up, and the science behind how their technology works. This is both expected and typical of the genre, but it is fun, at least, to see screenwriters Shane Black (who also directed) and Fred Dekker undercut those explanations with sarcasm.

The plot follows the Predator we have come to know, who has gone rogue and stolen a warship from its fellows in the opening moments, as it crash-lands on Earth, right in the middle of a sting operation in which McKenna (Boyd Holbrook), our protagonist, is the sniper. After the creature kills off all of McKenna’s unit, the soldier comes across its helmet and a high-tech arm band, both of which he sends off to the house where his ex-wife (played by Yvonne Strahovski) lives with their son Rory (Jacob Tremblay). Meanwhile, McKenna has been shunted off with a group of misanthropes to be “evaluated” (read: to have his memory wiped clean).

The second area in which the film overextends its welcome is in the sheer number of supporting characters who are present. There are the ones that matter, namely Casey Bracket (Olivia Munn), a scientist called in because of the potential for contact, and Traeger (a slimy, cheerfully profane Sterling K. Brown), the head of the research lab who becomes something of a human antagonist. The heroes know too much, Traeger and his men need to eliminate them for that reason, and meanwhile, neither the original Predator nor the new and improved one, which arrives to eliminate the first and track the missing cargo, really cares about the petty, human squabbles.

Then again, there are the other prisoners, each of which has an arbitrary characteristic and, if lucky, a single bit of character history: One chain-smokes and was dismissed from the military for trying to shoot his commanding officer. Another has Tourette’s and disrupts the proceedings with his tics (a “joke” that seems at odds with the film’s attitude toward Rory’s high-functioning autism, a condition that eventually becomes a plot point). Another is Irish. The remaining two are sexist creeps. Respectively, they are played by Trevante Rhodes, Thomas Jane, Alfie Allen, Keegan Michael-Key, and Augusto Aguilera, and collectively, they are mincemeat.

This means that they are, indeed, problems but also that, at the end of the day, they mean less (and, thus, have less impact on the proceedings) than the presence of the dueling Predators, who are here to undercut the interpersonal drama that arises from these characters and to be participants in sequences of expertly choreographed sequences of brutal, gory, explosive violence, which imposes itself upon the heads, limbs, and viscera of the human chattel. When the exposition comes, the quips come as quickly as the violence, with one character introducing an idea and another character, having caught on quickly, boiling the idea down to its essence with a wink and a nudge. The Predator is a bit of a mess of contradictions, but for its attitude, its performances, and the grisly carnage it promises with the title, the movie, in its way, works.
(Review by Joel Copling)