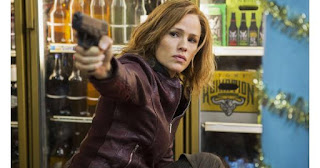 Hell hath no fury......or so we find out in abundance when Riley North (Jennifer Garner), scout mom and wife, loses her family to gang members on a mission, when out celebrating her daughter's birthday with her husband near the holidays. In an instance her life is forever changed as she recovers from her injuries and the emotional fallout. In five years time, she plots her revenge on every single soul that escaped legal vengeance. Her vigilante revenge feels palpable and any mother will understand the madness and rage. She chooses to hide out in the city's homeless area of Skid Row, becoming their protector, while living out of a van packed like an arsenal.

The story line is very predictable and while her successes are explicit and pretty unbelievable, they are no less satisfying. This is a great film if you are harboring resentments towards someone and want to imagine the gang members are your wrong doers and you are the assassin. Devoid of script and legit soundtrack, it's clear the budget was put into special effects and stunt doubles. The action is pretty great and satisfying. Not very probable but fun nonetheless in you are into that sort of smash em up, shoot em up, knife them in the eye sort of film. It will be no career saver for Jennifer Garner nor does it truly contribute to showing her "range" since it's pretty easy to be driven, angry and singularly focused. But it's a film that fills a space and serve a purpose for the niche audience that enjoys a long drawn out slaughter. It white possible it will qualify for some Razzies but consider what such a film is worth, in entertainment value.