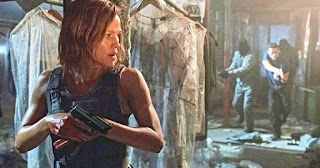 In “Peppermint,” Jennifer Garner is Riley North, is a distraught mother who returns to seek vengeance for her family whose entire family was wiped at the hands of a ruthless drug cartel five years ago. This is something that baffles me. Why do they pick five years as a significant earmark?

This tale marks actress Garner’s return to the action genre she knows all too well, following her stints on TV’s “Alias,” (2001-06) as well as turns as Elektra Natchios in the so-so “Daredevil” (2004) (Grade: C-) and the halfway decent “Elektra” (C+) in 2005. Garner was also cool in the underrated Peter Berg action-drama “The Kingdom” in 2007. Garner has a likable everywoman on screen presence.

The supporting cast all provide the right vim and vigor for their necessary roles. This includes Annie Ilonzeh as FBI agent Lisa Inman, who aids in the quest to bring Riley North in for questioning. Ilonzeh is a local girl, born in Grapevine, Tx. She has also appeared on “Arrow”as well as “Person of Interest” on newtwork TV.

Also important tom the story is John Ortiz as Detective Moises Beltran, who has a strong feeling of empathy for North’s battle with ridding evil from the world. Ortiz was great in the Oscar-winning “Silver Linings Playbook” in 2012. Ortiz shows off as a stern authoritarian figure who wants what is best for the city and its beloved residents within.

In the director’s chair for “Peppermint” is French director Pierre Morell, best known for 2008’s Liam Neeson-led “Taken.” Later, he would work with John Travolta in 2010’s “From Paris With Love” and the Sean Penn led tale with 2016’s “The Gunman.” The first in the bunch was a sheer piece of brilliance, but the latter two left a lot to be desired.

Going back to “Peppermint,” the revenge angle works because one actually sees what happens to her entire family and the entire audience is along for the ride. When she sits in front of the jury, Riley is as shocked as the audience is as the entire troupe of her families’ killers are set free. “Peppermint” does what it’s supposed to do and just provide viewers with an escape from the everyday.

I liked this movie because it is just a solid piece of riveting entertainment. Sure, it presses the buttons, but with purpose and meaning. This movie proves once again that a woman tale can deliver the goods big time. Garner shows off all the emotions, despair and animosity one takes with them in everyday life.

Also important to the storyline is “vigilante” status, since society paints vigilantes in a positive light, rather than a blight on society. That is why I liked this movie so much, because it portrays vigilantes with a purpose. I recommend this flick because it does exactly what it’’s supposed to do and just entertain and engage the audience for a brief 2-hour spell.

Grade B
(Review by Ricky Miller)