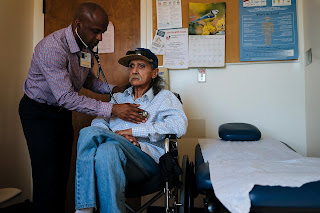 Although it’s a well-known topic, the AIDS epidemic of the 1980s is hard to grasp for those of us who were not alive during that time period (or old enough to comprehend - or care about - the then happening current events). It’s a topic that has occasionally popped up when talking with older generations but hearing (or reading) about an issue isn't as impactful as seeing it.

"5B" focuses on the nation's first ward, located in San Francisco General Hospital, designed specifically for the purpose of treating people with the disease. As with any new epidemic, victims were often met with fear and open hostility. Things weren't helped by the fact that this was happening solely in the homosexual community, a demographic already met with derision and condescension.

Even those who worked in the medical field dreaded interacting with the exponentially increasing number of patients. Some nurses and doctors flat out refused to work with them, resulting in patients being left without food and lying in soiled sheets. While their fear is understandable, something needed to change. Enter Cliff Morrison, a young nurse who worked for San Francisco General Hospital, the mastermind behind ward 5B.

In their documentary, co-directors Paul Haggis and Dan Krauss unfold the story of the AIDS virus, originally known as "gay cancer." The time period, 1970s San Francisco, is established via a montage of footage as rock-star Blondie's "Dreaming" plays in the background, showing the mood of the city before shifting into the documentary's main focus - the sudden appearance of the disease in the early 1980s and the alarmingly quick rate at which those who contracted it passed.

"5B" follows Morrison and a handful of his nurses as they are interviewed about their time working in the ward. Through their interviews and selected footage found from that time period the horror of the situation is made clear. The footage will surely upset most audience members (several of the viewers in the auditorium were sniffling by the time the documentary finished). Haggis and Krauss don't shy away from showing the nastiness of the disease head-on, focusing at times on footage showing the intense suffering the disease causes in those infected.

One of the strengths of Haggis and Krauss's documentary is that they allow people from both sides of the argument to discuss their points. Morrison and his crew discuss treating their patients with compassion including interacting with patients without the use of protective gear. This is one topic I thought wasn't explained too clearly. Did they mean no gloves at all or no gloves for casual contact? Also interviewed are doctors and politicians who were more conservative with their approach to treating the disease. Some of the points they bring up do make sense. Unfortunately, Haggis and Krauss don't do a good job of explaining why their opinions/solutions were not the best options to solve the problem.

"5B" is an enlightening documentary. It will be hard for some people to watch, but it's definitely worth the effort to watch despite some problems.
(Review by Bret Oswald)

Posted by Dallas Movie Screenings at 11:28 AM

Email ThisBlogThis!Share to TwitterShare to FacebookShare to Pinterest
Labels: 5B review, Bret Oswald