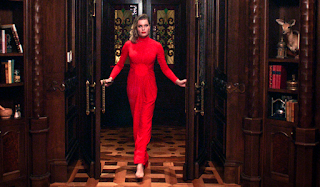 It's Sam’s (Hayley Griffith) first day as a pizza delivery girl. As the new employee, she’s given the worst customers to deliver to – those who don’t tip. Hearing her boss call out a new delivery for a party happening in a ritzy part of town outside the restaurant’s delivery area, she quickly volunteers in hopes of receiving a large tip. Her boss has demanded a five-dollar deposit for her to use the delivery bags, leaving her desperate for tips to use as gas money. Sam arrives at the large house only to have the man who accepts the order silently close the door in her face without leaving her a tip. Discovering that her scooter won’t start, the already enraged Sam finds her way into the mansion to demand a tip, never a smart idea but an especially poor one this time. The party-goers are a group of Satanists who have just found out that their sacrificial virgin isn’t one and quickly find out that Sam is.

Danica (Rebecca Romijn) – sleek, stylish, commanding – is the leader of this cult, which seems to include everyone living in the immediate area. After unsuccessfully attempting to hold Sam until they are ready to perform the ritual, she and her cohorts do everything in their power to find her.

“Satanic Panic,” directed by Chelsea Stardust and written by popular horror author Grady Hendrix, is a cheeky horror-comedy. The film, produced by Fangoria, attempts to take a tone similar to something Sam Raimi (“Drag Me to Hell”) would make, combining humor with over-the-top horror elements. The snappy dialogue, mostly from the cult’s ex-virgin Judi (Ruby Modine) and Danica’s right-hand Gypsy (Arden Myrin), creates a lot of the movie’s humorous moments.

Fangoria’s preference for practical effects over computer wizardry gives the movie an edge. Stardust allows all hell to break loose in her movie – cast members are attacked by inanimate objects, organs are turned into monsters, etc. There’s plenty of gunk flying around the screen. As a whole, the effects used look great, even if they occasionally don’t look completely believable. This mostly applies to the monster make-up which leans toward goofiness.

Although “Satanic Panic” has a lot of the ingredients horror fans seek out, it still came across as lacking. The humor often didn’t work and the sense of “fun” (fun is only in quotation marks because some people will surely scoff at the idea of a horror movie being fun) the filmmakers were going for didn’t totally come through. Stardust’s movie is entertaining enough, it just never rises up into something stellar. It’s likely to become a cult hit with some horror fans and is worth seeking out later in the year when it’s released (September 6) in theaters.
(Review by Bret Oswald)