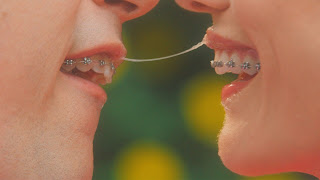 “Greener Grass” opens with a shot focused on a small boy, Julian (Julian Hilliard), yawning in the middle of a field as a game of soccer is played around him. Eventually, the boy having no desire to participate, he’s struck (barely) by another child and, after a delayed reaction, falls to the field, screaming and carrying on like he’s been severely injured. For “Greener Grass,” Julian’s behavior is just the start of the oddities.

Julian’s mother, Jill (Jocelyn DeBoer), and her friend, Lisa (Dawn Luebbe), are sitting on the bleachers watching the game. Both women are dressed in bright colors, their immediate surroundings just as bright, cheerful, and welcoming. But, as evidenced by Julian’s recent meltdown, the lives of the people in “Greener Grass” are anything but normal. While the women have been sitting and chatting, Jill’s been holding on to her newborn baby. Suddenly, in the midst of the conversation, Lisa acknowledges the presence of the “new” child. Jill responds by randomly offering her child to her, which Lisa accepts. The camera then zooms in on Jill’s grotesque, forced, and wavering grin, braces shining in her saliva-filled mouth (all the adults in “Greener Grass” wear braces), as the movie’s opening credits play.

Stuck in a country club-like community where everyone drives a golf cart and dresses like they are ready for a round of golf, the film’s characters compete amongst themselves, frantically trying to make sure it’s known they are just as good (or, hopefully, better) than their neighbors. Lisa announces her son Bob (Asher Miles Fallica) is now in an advanced after-school math program, prompting Jill to quickly proclaim that Julian needs to be tested to join this too. Her husband, Nick (Beck Bennett), nonchalantly states that admittance was based on previously done standardized testing and that their dud of a son didn’t score high enough. This absurdist comedy only gets sillier as it progresses. Its co-stars (DeBoer and Luebbe) are also the film’s co-writers and co-directors. The duo has a firm grasp on what they want to present to viewers with their bubble-gum coated, weirdo version of hell, solely focused on demolishing Jill’s happy façade.

The photography from cinematographer Lowell A. Meyer looks fantastic. The set’s vibrant colors pop off the screen and scenes are excellently framed. Performances from the cast, who somehow manage to keep a straight face throughout each bizarre situation, are equally strong. Yet, in spite of this film’s production values, “Greener Grass” just doesn’t work. It often feels like DeBoer and Luebbe are being weird just to be weird. At one point a character shoves a soccer ball up her dress and pretends to be pregnant. Her make-believe pregnancy is kept up until she gives birth to the soccer ball (named Twilson because “Wilson was Tom Hank’s baby’s name”), which she then carries around and coddles like a newborn the rest of the movie.

In “Greener Grass” stupidity reigns. While it will surely have late-night (or drunken) comedy appeal for some, others will be exasperated by its content, which quickly wears thin. “Greener Grass” originated as a fifteen-minute short released in 2015, perhaps it should have kept that brevity. Running at approximately one-hundred minutes, “Greener Grass” feels like it lasts an eternity. It’s never as funny as it thinks it is and just as frequently annoying.
(Review by Bret Oswald)