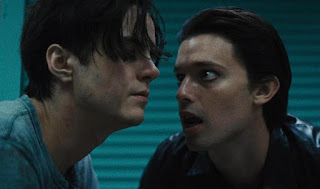 A man enters a diner and starts shooting at everyone inside. A small boy, Luke (Griffin Robert Faulkner), flees his parent’s New York City apartment to get away from their constant bickering. The two unconnected events become a turning point in Luke’s life when he happens upon the crime scene, now taped off and in the process of being investigated by police, the shooter’s bullet-ridden body hanging out the diner’s open door. As he observes this disturbing tableau, Luke meets a new friend, Daniel (Nathan Chandler Reid). His friendship with his new friend, who only Luke can see, leads to trouble resulting in his mother (Mary Stuart Masterson) forcing him to lock his troublesome imaginary friend up in her mother’s old dollhouse.

Years later, Luke (Miles Robbins) moves out of his mother’s home and across the city into a college dorm. Her mental health, stable while she was caring for her son, takes a sharp decline following his move causing Luke to worry that he may someday inherit her schizophrenia symptoms. Luke’s psychologist (Chukwudi Iwuji) suggests facing his childhood demons head-on and encourages him to release his imaginary friend from his holding cell, the dollhouse. Daniel (Patrick Schwarzenegger) is fully grown now too and his demented streak has only gotten worse.

Directed by Adam Egypt Mortimer and based on a novel, “In This Way I Was Saved,” by Brian DeLeeuw, who co-wrote the screenplay with Mortimer, “Daniel Isn’t Real” is a horror film that plays with the audience’s expectations. Daniel attempts to enforce his personality on Luke. At first, helping him out by introducing him to a pair of potential romantic interests – Cassie (Sasha Lane) and Sophie (Hannah Marks) – before delving once again into his darker personality traits. Is Daniel a symptom of an emerging mental illness or is he something else?

Robbins and Schwarzenegger play off each other nicely. Schwarzenegger plays a Tyler Durden-esque character (complete with the character’s stylishly loud outfits) to Robbins meeker Narrator-like one. Not that “Fight Club” is a film that is completely comparable to this one but the dynamic between Daniel and Luke has a similar feel to the one between Tyler Durden and the Narrator. Schwarzenegger’s Daniel domineers over the screen as Robbins’s Luke attempts to remove his imaginary friend from his life once and for all.

By this movie’s finale, things may not go in the direction you expect. Mortimer puts the film together well – finely acted, well shot, and compellingly told. “Daniel Isn’t Real” isn’t a perfect movie but the right audience will have a lot of fun with it. Hopefully, they won’t end up surrounded by people whose cell phones continually go off during the film like I did, making me wonder if I’d have a slightly higher opinion of this without the many distractions.
(Review by Bret Oswald)

Posted by Dallas Movie Screenings at 11:14 AM