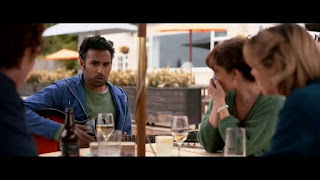 Who doesn't love the Beatles? The English pop group exploded on the scene in the early 60's and took over the music world with their huge catalog of unforgettable music as a group and their solo projects. But what if the world didn't know they even existed and their tunes where lost to the the void. That's the premise of the film directed by Danny Boyle (Slumdog Millionaire) and written with Richard Curtis (Notting Hill, Love Actually). Curtis infuses the story with his unique talent for quirky romances. While this movie is sort of about the music, it's really the unrequited romance brewing.

Himesh Patel is brilliant as Jack Malik, a struggling singer/songwriter who has yet to find any type of success outside of his handful of faithful friends. He's managed by long time best friend Ellie (Lily Collins), a school teacher, who finds him gigs in all sorts of places with unfortunately very small and uninterested audiences. Jack has basically decided to give it all up when he's hit by a bus during a world wide black out that lasts 12 seconds. Ellie gives him a new guitar since he lost it in the accident so he plays his friends Paul McCarthy's Yesterday as a thank you. His friends are gobsmacked and wonder when he wrote it. Insisting it was Paul...of George, Paul, John and Ringo...the Beatles, they have no idea what he is talking about. Googling the Beatles brings a search for bugs. Looking through his record albums, all his Beatle albums are gone. He begins to try and remember every Beatle songs, littering his wall with post it's while trying to recall the lyrics. It all begins to cascade from there. He finds a local studio where he cuts a CD of Beatles hits and hands them out to customers where he works at wholesale warehouse. The local TV show feature's him as the singing warehouse worker. Ed Sheeran sees the show and comes by his house and asks him to open his tour of Europe.

The fame and success that he's worked for most of his life is finally happening, but Jack feels guilty because he didn't actually write these songs. He falls in with Ed's smarmy music industry agent Debra Hammer (Kate McKinnon who is wonderfully wicked) who brings him to California to record and remake his image into a proper product. Jack finds himself in a complicated mess of the music world overkill, fans chasing him everywhere and longing for the simple life with his pals and his best friend Ellie. It's a sweet and sometimes predictable story of you don't know what you got til it's gone. Then there's these mysterious people waving a Yellow Submarine at him feeding his paranoia. The best part is the Beatles are re-introduced to this new generation with fresh arrangements. His rendition of Help! is full of urgent angst that almost outshines the original. It's easily the feel good movie of the year an Ed Sheeran is in it.
(Review by reesa)