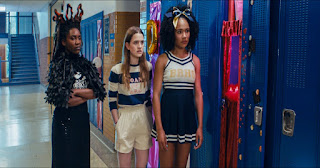 Jennifer Reeder’s “Knives and Skin” opens with a mother standing outside her daughter’s bedroom. She’s holding a knife and giving the impression that she intends to harm her child. The scene’s lighting and music giving off the sense of malicious intent – not to mention the fact that she’s furtively holding the knife behind her back as if she plans to surprise her daughter with it once she opens the door. There’s malice present in Reeder’s film, but this woman, Lisa Harper (Marika Engelhardt), whose daughter, Carolyn (Raven Whitley), is about to go missing, is not the harbinger of it.

Lisa uses the knife to pick the lock to her daughter’s bedroom, illuminated in neon blues and reds and bringing to mind the work of some Italian directors, to find her daughter not there. The missing Carolyn is out with a boy, Andy (Ty Olwin), one of the school’s star athletes. Finding that Carolyn isn’t going to put out, Andy abandons her in their isolated make-out spot. It’s a bad decision that comes back to haunt him when Carolyn doesn’t return.

“Knives and Skin,” written and directed by Reeder, focuses on the fallout from Carolyn’s disappearance. How it affects the townspeople, her mother, and her classmates. Reeder’s film covers multiple themes, including subjects like adultery and bullying, in its subplots involving the film’s many peculiar characters. Initially starting strong, the movie begins to lose itself with its multiple storylines. Reeder focuses on so many characters that at times it’s difficult to remember who is who, especially when the focus returns to a character who was only briefly introduced in a previous scene.

Characters often break out into dirge-like covers of 80s pop songs. Since Lisa is the school’s choir teacher, most of these take place while she’s conducting her class. These scenes are also used to illustrate her continually declining mental health in light of her daughter’s disappearance. Other songs occur in ways that make the characters seem as if they are part of some demented version of “Glee.” It’s a quirk shared among the film’s many odd characters, though not used frequently enough to classify this film as a musical. The songs don’t help move the story along either, often acting only as filler.

Oddity for oddities sake seems to rule the world of “Knives and Skin.” From glowing glasses and shining, continually bleeding cuts to an unemployed adult deciding his next career move should be working as a clown, Reeder includes all manner of strangeness in her film. The movie is stylistic enough to be visually interesting but the content starts to get tiresome by the movie’s second half. Eventually, “Knives and Skin” becomes an endurance exercise. Her film takes its time wrapping things up, focusing on the characters while ignoring all the supernatural nonsense brought up throughout, causing the movie’s final impression to be one of frustration.
(Review by Bret Oswald)