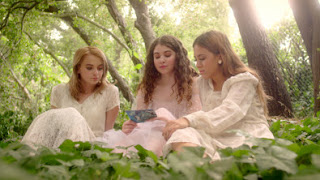 Tyler Taormina’s “Ham on Rye” is like a dystopian take on Richard Linklater’s “Dazed and Confused.” Taormina’s film focuses on a group of teens preparing for an event. The exact nature of this event is never made entirely clear until it finally occurs mid-way through the movie. The film has a kaleidoscopic feel due to the way Taormina weaves in and out of social groups, capturing these awkward teen’s interactions within their cliques and among their peers. There’s no clear-cut narrative or lead character in this film, at least not one that is instantly recognizable.

“Ham on Rye,” written and directed by Taormina with Eric Berger co-writing the script, seems like an extension of Taormina’s earlier short, “Wild Flies.” The short, also absent of a clear narrative as the camera weaves through multiple groups of people in a pizza parlor, has a similar feel to the one created here. Taormina’s goal seems to be leaving his viewers with an impression of his characters like they are sitting in a crowded area people watching instead of allowing them to grow connected to any one character.

Opening with shots, constantly switching to new subjects, of boys and girls putting on dress clothes, the first guess would be they are preparing for a school dance. Possibly prom? Whatever it is, there’s a sense of excitement – the kids seem eager and their parents (at least the ones we see) seem rapturous. The teens take various routes to their destination. Some of them choose to walk, others to ride with older siblings, while a handful are abandoned, left on the side of the road as the rest of their peers move forward.

Taormina’s film is a metaphor for coming-of-age. The first half is optimistic with the bright and cheerful photography suggesting a promising future, though there is a slight undercurrent of malaise present in a couple of the characters. It’s enigmatic while hinting that some answers will come. There is a lot left for the audience to decipher themselves, something that can more often than not begin to produce irritation. The second half changes gears following the teen’s party. Taormina suggests through his character’s moods and behavior what happens to those who stick around in a small town after high school. It’s depressing and, in a way, insulting in its implications that those who stay behind are losers or lost in some way, though he does attempt to give one character a hopeful future in the film’s concluding moments.

“Ham on Rye” is at first intriguing before becoming frustrating. The second act drags out longer than it should. Although this movie is brief, 85 minutes, it might have been stronger with a shorter length. This film’s point is made long before it’s final shot.
(Review by Bret Oswald)