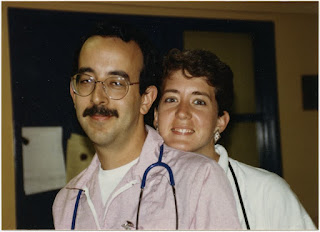 5B
*** (out of ****)
5B is expertly, if deliberately, balanced between the personal and the political. The first half of Paul Haggis and Dan Krauss’s documentary archives the lives and, in some cases, deaths of the earliest survivors and victims in the AIDS crisis, and upon a clearly delineated shift in tone and pacing, the second half examines the wrongful perceptions of the disease and the political response to it, at least in the United States. There is something a bit clinical in the film’s approach, which must inevitably include some surprises at the end of a couple of the stories it tells. Perhaps framing those developments as surprises is a bit of a cheat.

Perhaps, though, the impulse is a different one. After all, this is a documentary that seeks to break down the misconceptions of the fatal syndrome that swept through vulnerable parts of the world most intensely in the late 1970s and the first half of the 1980s, until a type of protease inhibitor made contracting AIDS, following a diagnosis of HIV, thankfully less likely. The documentary is constantly a kick in the stomach by the realities of this disease. Many of the interview subjects, for instance, must be the doctors and nurses who attempted to treat the disease in patients with that fateful prognosis.

The reason, of course, is its own, somber reality check: Most of the interview subjects who would be in a position to talk about the effects of the disease have long since succumbed to it. Only half of Haggis and Krauss’s intentions lie with an account of those effects, however. The main subjects were once healthcare workers on the eponymous ward, dedicated to AIDS patients after an excruciating period of misinformation and paranoia about the disease, of the San Francisco General Hospital. The ward closed in 2003, twenty years after being established by a few handfuls of rebellious doctors.

The need for the ward rose from the prevailing and incorrect belief that mere touch, then the swapping of mucus or other fluids, spread the disease that would kill tens of thousands of people by the time it was addressed by those in a Presidential administration. It would be several years before the realization of its being a bloodborne illness occurred, and by then, an old prejudice had already set in. Doctors and nurses in what would become ward 5B had a radical solution: Physical touch was sympathetically nurturing to these wounded and weathered souls.

The outrage came from that old prejudice: It was believed that the illness, which first and most seriously affected gay men, sprung up out of the ether of, what was considered to be, a delinquent lifestyle. Bathhouses were seen as massive orgies and grounds-zero for the epidemic (and news reports, specifically calibrated to underline this fear, are eye-opening to that effect). Medical professionals sent away those suffering the disease to die in agony and solitude. A nurse, infected with the disease after an accidental needle prick, was then ushered into anonymity when it was believed that mere exposure to the disease was synonymous with sexual deviancy.

One of the great coups of this achievement, by the way, is the revelation of who that nurse, labeled “Jane Doe” in the wake of the incident, really is and the perspective of the person who went through that initial fright of contracting an incurable disease. Facts and the names of people come and go quickly, which may be why this review hasn’t mentioned any. Haggis and Krauss are more interested in the broad story of the ward’s opening and, through a brief examination of President Ronald Reagan’s weak response, political impact. 5B could do to go deeper, but as a document and act of political activism, it’s quite affecting.
(Review by Joel Copling)

Posted by Dallas Movie Screenings at 11:30 AM

Email ThisBlogThis!Share to TwitterShare to FacebookShare to Pinterest
Labels: 5B review, Joel Copling