The first of Sunday’s screenings at the Oak Cliff Film Festival was a double-header of sorts, two short films. One a brief short that didn’t end up fitting into its original block of shorts and the other a longer short that isn’t long enough to be considered a feature. 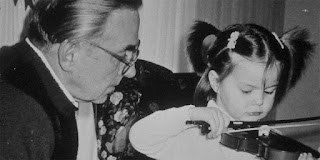 This block opened with “Veslemøy's Song” directed by Sofia Bohdanowicz. In the short, a young woman, Audrey (Deragh Campbell), discovers that her grandfather’s violin teacher, Kathleen Parlow (somewhat famous during her lifetime but since faded into obscurity), had an orchestral piece dedicated to her. Audrey’s quest to hear the piece takes her to the New York Public Library where an appointment has to be made to listen to the rare recording. Apparently, Bohdanowicz’s film combines documentary with fictional drama, something I didn’t pick up on while watching it. There really wasn’t anything special about this short, told mostly through voiceover supplied by Campbell. It’s not a particularly interesting story and nothing much happens before it abruptly ends. 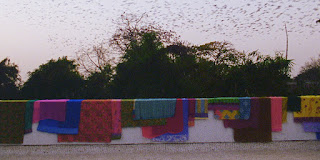 The second selection, “The Grand Bizarre,” is more experimental in nature. Directed by Jodie Mack, “The Grand Bizarre” doesn’t attempt to tell a story. Instead, Mack creates a mood, established via a series of photographs featuring multiple pieces of fabric. Her film has a visual style reminiscent of the stop-motion some musicians used for their music videos in the 1980s, think Peter Gabriel’s video for “Sledgehammer” or Nu Shooz’s video for “Point of No Return,” or animator Norman McLaren used in shorts like “Neighbours” and “Dots.” The imagery is driven by a soundtrack that also veers towards the experimental. The lack of a traditional narrative may sound daunting but if you allow yourself to go with the flow and get absorbed in the mood she’s creating you might like what you see. I’d be lying if I said I completely enjoyed Mack’s film, it does feel like it goes on a little too long. There were several moments I found myself wondering how much longer it would last.

Neither short is something I’d recommend to casual viewers but if you’re curious I’d check out “The Grand Bizarre” over “Veslemøy’s Song.” While both lack a good narrative, Mack’s film feels more purposeful than Bohdanowicz’s.
(Review by Bret Oswald)