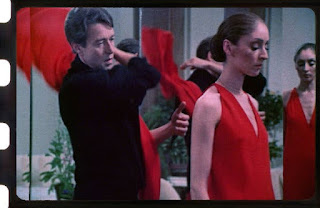 There’s really nothing special about Frédéric Tcheng’s documentary on fashion designer Roy Halston Frowick, publicly known by his middle name Halston (which is also the name of this documentary). Tcheng’s formatting, typical of the documentary film, uses a mixture of present-day interviews of co-workers, friends, and family mixed with archival footage, previously recorded on camera and audio interviews, and photographs and ties them together via an unnecessary (and for extended periods of time forgotten) scripted framing device featuring a fictional narrator.

Beginning with the end of the story, Tcheng starts “Halston” as the narrator (Tavi Gevinson) begins the task of viewing and erasing the designer’s videotapes (a personal archive of his career), the photography showcasing the man’s empty office as she narrates. Those who already know the story of Halston’s career will know what’s happened. For the rest of us, it’s left a mystery to be uncovered by Tcheng’s film. The year is 1984, to understand how things came to this point, Tcheng takes viewers back to the start of the fashion designer’s career.

Halston began his career as a milliner for Bergdorf Goodman, initially making a name for himself for his work on Jackie Kennedy’s outfit for JFK’s inauguration. By the late 70s, he had opened his own store and taken the fashion world by storm, a man who knew how to take a single piece of fabric and beautifully shape it to his model’s bodies. However, Tcheng doesn’t take to “hero-worshiping” his subject. The documentary chronicles the rise and fall of the fashionista. Halston is shown as likable, friendly, and talented while also being revealed as a controlling, picky, demanding boss – one who goes too far, bullying results out of his employees. The archival footage does an excellent job of showing his dual nature and how a photograph (or film) can tell a thousand lies.

Though Halston died in 1990, one of the many casualties of the AIDS epidemic, those being interviewed still have very strong feelings about their time with him. Unlike many documentaries where emotions and actions come across as staged, the ones on display here look authentic.

Through his documentary, Tcheng shows how Halston’s drive for success ultimately wound up getting the better of him at the end. It’s an informative yet dry documentary despite Tcheng’s attempt to spice things up via some scripted material. By the time it’s over, it feels like it’s gone on longer than it should have.
(Review by Bret Oswald)