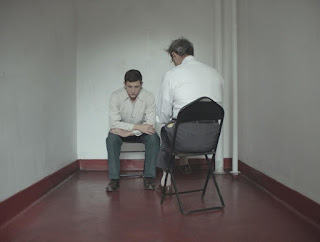 Andy (Tye Sheridan) works at his father’s (Udo Kier) ice skating rink, smoothing the ice with the Zamboni and sharpening blades while his father teaches skating. After his father suddenly drops dead, his life memorialized by a Busby Burkeley-esque shot performance from his students, Andy is left alone. His mother’s former doctor, Dr. Wallace Fiennes (Jeff Goldblum), drops by and offers him work as a photographer. The doctor is a lobotomist who travels to psychiatric hospitals around the country performing the procedure.

The best thing that can be said about writer/director Rick Alverson’s new film “The Mountain,” a morosely picturesque feature bathed in a dull palette by cinematographer Lorenzo Hagerman, is that it looks nice. Hagerman’s photography, using the defunct Academy ratio that seems to be making a small comeback in recent movies, is striking. Landscapes are beautifully captured and the actors and stark sets are excellently framed within the shots. Everything intensified via moody lighting that helps to create a melancholic tone for the film.

Alverson’s movie, co-written with Dustin Guy Defa and Colm O’Leary, is a listless work. There is no obvious drive to its characters, thanks to the scripts lack of dialogue and its character’s expressionless performances. It’s safe to assume that Andy (Sheridan) is depressed, an impression reinforced by the film’s downtrodden settings and drained colors, but his exact moods are never clear. Sheridan spends the majority of the movie wandering around in a dazed stupor. There is no hint given as to what is going on in this character’s mind and, besides an angry outburst toward the film’s concluding moment, he could be the victim of a lobotomy himself. Goldblum’s does a better job playing the eccentric doctor, though it’s not enough to save this movie.

“The Mountain” moves along at a lethargic pace, never clear on its intentions. Some additional characters are thrown into the mix later in the film. A man, Jack (Denis Lavant), and his daughter, Susan (Hannah Gross), who becomes a patient of Fiennes. Neither character adds much substance. Jack has a proclivity for nonsensical rants devoid of any meaning. If they were meant to add some depth, they do not.

What is the purpose behind this story? If there was one, it’s not apparent. By the time the movie comes to its conclusion it feels like no answers have been given. The ending is sudden and jarring. It offers no sense of closure and doesn’t attempt to tie anything together, leaving the audience as cold as the final scene’s frigid backdrop.
(Review by Bret Oswald)