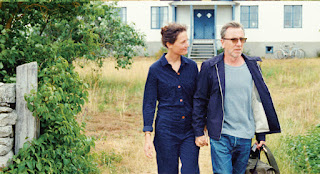 Watching this film is like watching a bachelor show or an island-set reality show on television. Bergman Island is a simple French-drama film that focuses on a married, filmmaking couple who retreat to the Swedish island that was inspired by Ingmar Bergman to write screenplays for their upcoming, newer films. As they explore the island, they soon learn what lies between reality and fiction as they start to blur and discover new and interesting things.

English actors Tim Roth (The Incredible Hulk, Pulp Fiction) and Vicky Krisps (Phantom Thread) both portrayed Tony and Chris, the married couple and collaborating filmmaking duo. They both act well and score magnificent weaving pointers as their chemistry with each other gathers some crafting-filled arcs like any ordinary film that features conflicting or dysfunctional married couples. Of course, playing a hard couple is difficult, but they seem to like they’re getting used to it as this is a drama-romantic film for its themes of reality.

This film is directed by Mia Hansen-Løve who is famous for directing her French-drama film All is Forgiven, which was released in 2007 and won her the Louis Delluc Prize for Best Film in 2007. As director, Hansen-Løve brings the cultural themes in the film: Human relationships and art that become major climaxes of this film. She utilizes most of the single-camera usages to capture the perfect, yet vigorous chemistry of Tony and Chris as well as letting the characters roam to life on Fårö, which is an island in Sweden and the main setting of this film. However, there are some dark and non-colourful beauties that didn’t fit the scenery well of such profound landscapes the actors are trying to adjust emotionally. It’s a simple task focused on balancing the character development of all actors. While trying to avoid any conflicts and issues regarding the emotion and depth, no matter, Hansen-Løve tries her best to make a film as complex, filled with consistency. Hansen-Løve reminded us that not all boys get the girls at the end and call it a “happy ending.” The film’s end is put as it goes.

Actress Mia Wasikowska (Disney’s Alice in Wonderland remake) and actor Anders Danielsen Le also appeared in the second half of the film as the conflicting-character couple Amy and Joseph, whom Chris came up with the idea for the plot of their new film. Their acting together is consistent as they never bump into a hole of perilous journeys nor look at the recipes of disaster.

Bergman Island is okay, it clocks into almost two hours of drama, reality, and with a little seeds of romance blooming in Sweden. Roth, Krisps, Danielsen Le, and Wasikowska are what makes the film pleasant to watch. Although, there isn’t much of the excitement happening going on in the film, all I’m saying is this film is interesting to watch but it is somehow cheesy in any way. However, the film manages to weave together with two storylines, in which they manage to blend all together against the backgrounds of the iconic island landscape.