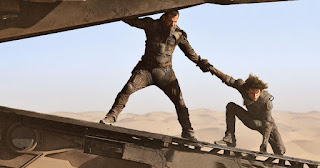 The Anticipating Word of the Year: Dune!

Surely, lots of people don’t trust remakes or reboots no matter how good they are, but if you read the book or watched the 1984 version, you find it very difficult to look upon the eyes and minds of director Denis Villeneuve. Here, Villeneuve takes on a huge refreshing take on Frank Herbert's iconic story "Dune". While the 1984 version flopped at the box office, this recent 2021 version is something that had to be watched regardless of the looks, the colors, and the scales. Just letting you viewers know that this film serves as part one, but the question is does this film become a necessary remake? The answer is and remains anonymously unsolvable.

Based on Frank Herbert’s novel, Dune focuses on Paul Atreiedes, the son of the noble family whom they accepted the stewardship at Arrakis, is entrusted to protect the desert planet Arrakis, known as Dune, the only source for the most valuable substance called melange, or “spice,” a priceless drug consumption that extends human life and lifespan.

Academy-Award nominee Timothée Chalamet (Call Me by Your Name) stars in the film as Paul Atreides, the ducal heir of House Atreides. His acting performance is highly admirable as he always sticks his neck up on screen along with the Dune family of actors, giving them some guidance on how his character and story elements follow through. His ways of acting kind of stands up to his game from being a drama actor to the action-packed-science-fiction actor, which is something lots of dedicated actors are meant to be as a good startup.

Denis Villeneuve, known for directing Arrival and Blade Runner 2049, takes the leadership role as director of the film under the Warner Bros. and Legendary Pictures banner. With his direction, this definitive version of Dune outshines the classical version dated back in 1984. This includes the prestigious performances from the cast, the writing, and outstanding special effects that look Oscar-worthy for anyone’s artistic opponents. And what is nice and clean is Hans Zimmer's score. His music compositions are well spot on as if he always puts his heart and soul like his previous films, even when he struggles piece by piece, he never gives up on himself and his fans.

While Villeneuve's ambitious production proved to be worthy at first rate, some pacing is a bit tricky to follow as well as small scenes that really threw me off. It's understandable to find that this film is kind of like a prologue like Avengers: Infinity War, given the fact that the ending leaves a little cliffhanger, and never lets up with a sense of urgency, by design lacking fun and smash-hitting action. The main messages of the story being provided by the cast are death, sacrifice, politics, religion, technology, and human emotion, as the setting sections of the empire confront each other in a desperate struggle for Arrakis and its melange (spice). Personal intimate fight and battle scenes are extremely (and highly) effective. This sci-fi atmosphere tops all over the set, but does not surpass the tangy-moody experience and the balancing sci-fi element-making equality compared to his own Blade Runner 2049.

Presently, this massive star-sterling orchestra of high-profile actors are all impressive and have done an outstanding job on their acting parts, including the likes and pros of Rebecca Ferguson (Doctor Sleep), Oscar Isaac (Inside Llewyn Davis), Josh Brolin (Milk, Avengers: Endgame), Stellan Skarsgård (Chernobyl), Zendaya (Spider-Man: Homecoming), Dave Bautista (Guardians of the Galaxy), Charlotte Rampling (45 Years), Jason Momoa (Aquaman), and Javier Bardem (No Country For Old Men). Out of all the casting performances, Jason Momoa, Stellan Skarsgård, and Zendaya really killed it as if they were actually having fun with the cast, the crews, and Timothée Chalamet.

Despite the pacing issues, the somewhat-unmoved storylines on small amounts of scenes, and the film being run for two-and-a-half hours, this version of Dune is worth the watch thanks to the genius loads of visual effects, the messages, Hans Zimmer’s music, the production designing set-ups. and the tremendous performances from the orchestrated ensemble cast. I would easily give my compliments to the director himself, Timothée Chalamet, the cast, Hans Zimmer, and the visual effects crew. Villeneuve really makes a vivid, riveting experience to both weaving fans and audiences out there. You really should watch this, it is a guaranteed must. This film is up in theaters and on HBO Max.