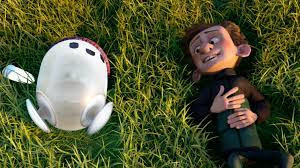 The world that the characters of “Ron’s Gone Wrong,” an animated movie from 20th Century Studios, inhabit is very similar to our own. Like many of us, they are obsessed with social media and obtaining the newest technological device. In this case, the device is a small ovoid-shaped robot called a B-Bot. B-Bot’s are basically like a smart phone except they follow their owners around serving as a “Best Friend Out of the Box.” In other words, social interaction is being replaced by interaction with a machine – sound familiar?

Our protagonist, middle schooler Barney (Jack Dylan Grazer), desires a B-Bot more than anything. All the other kids in school have one, except Barney, leaving him the odd one out. In fact, it appears only children own and interact with these bots, which is strange considering the demographics of the audience where the device is introduced at the beginning of the film. The devices are set-up to record and to know everything about their owner, not to mention the fact that the user has to activate the machine with their handprint.

All are troublesome plot points which leads to one of today’s biggest ethical questions – how much data about each individual do these tech companies need? It’s probably safe to say this is a theme co-directors Sarah Smith, Jean-Philippe Vine, and Octavio Rodriguez are venturing to explore. But, that’s beside the point. While older audience members may find it an interesting plot point, younger viewers, the movie’s target audience, aren’t going to care about ethics. Looking beyond that glaring issue, “Ron’s Gone Wrong” is a fairly cute animated movie about what friendship means.

Barney is a social pariah for not owning a B-Bot. Following some B-Bot related bullying from classmates, his father (Ed Helms) and his grandmother, aka Donka (Olivia Colman), speed to the Bubble store to purchase one. Barney’s family doesn’t have much money, and the store is closed, so dad and grandmother buy a damaged bot off a worker in the alley behind the store.

Enter Barney’s B-Bot, Ron (Zach Galifianakis). Ron does absolutely nothing right. He can’t get Barney’s name correct or connect to the Bubble network, and is missing code. Uh-oh. Of course, Ron causes a whirlwind of problems for Barney, the other students, and the residents of their town, leading them all to learn some valuable life lessons.

I found this to be an enjoyable movie. The humor is mostly aimed at the younger crowd but there are some jokes that should land with an older audience. Pacing is an issue and I can see some growing restless while watching this. Running at 106 minutes, “Ron’s Gone Wrong” could use some trimming. Just when you think the film’s about over, the filmmakers set up another sequence that extends the runtime a bit longer. Still, this is one of the better animated movies to come out recently.