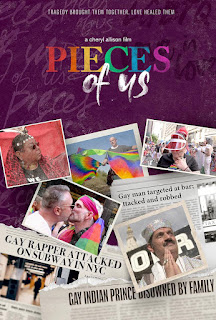 Pieces of Us picks up the slack for the LGBTQ+ community.

Part of the Dallas Videofest 2021 as a worldwide premiere, Pieces of Us is a documentary tale that takes the audiences through the cosmic journeys of LGBTQ+ hate survivors who share their inspirational stories and interviews throughout the film. These interviews include some LGBTQ+ individuals whom they all have tolerated and the Prince Manvendra Singh Gohil of India himself. As the film progresses, it also tells how speaking the truth can be quite difficult for those who are listeners and to learn how to build a support community that sparks global-phenomenal change. As people try to avoid violating their rights but want to have their lives changed forever, their main goals from those experiences are fighting the hate, standing against hate, giving voice to the voiceless, and giving hope to the hopeless.

The director of this film is Cheryl Allison who recently produced her own 2019 film Shatter the Silence, which won her various awards including Impact Doc Awards and USA Film Festival. As director, Allison is scoping the ropes on filming by operating camera movements all over each scene from interviews to love-hate relationships, family issues to school intolerance, and from intolerance to community support. Allison, whilst guiding the cast, crews, and those touching interviews from the LGBTQ+ individuals, takes a lot of effort to gather some stories and their horrifying pasts to collide each other into one, big shattering silence.

The film’s somewhat-pitiful plot seems to be full of love, power, and dignity. Really captures the poignant voice and craftsmanship with a side of disturbing contents along the way despite some smallest sloppy editing cuts that eat up the good stuff. The story gives me some oozing tender moments on how this film makes it easier to learn how to spread one’s own voice. One of the most powerful messages is “love is love,” it’s a medicine for people’s hearts and lives while hate is the disease. Hate is never the answer just as violence is never the answer as well. All she knows is, she loves looking out for other people and wants everyone who is suffering or has been bullied to let their voices come out towards this whole wide world. This is something people need to take action upon hearing what's going on to the public. She, along with her cast, know that letting out a voice is tougher to do so, but it’s okay to speak up if anyone has been through lots of pain and suffering. As aforementioned from my first paragraph, Allison’s biggest take is “enough is enough.”

Pieces of Us is one of the most inspiring documentary films of all-time. The director really put her heart and mind into making this film as interesting as ever, along with the cast and crews. I have seen a lot of films that evolve LGBTQ+ characters’ whose voices affect their community, but it’s the best way to understand and to nurture what it means to be loved, what it means to have freedom in their own right. If you come across this flick, you really, really should watch it. This sentimental documentary film is a must, predominantly for LGBTQ+ audiences out there. So, for the love of God, go see it. You’ll find this very heartwarming and filled with pride.

Posted by Dallas Movie Screenings at 11:07 AM

Email ThisBlogThis!Share to TwitterShare to FacebookShare to Pinterest
Labels: Henry Pham, Pieces of Us review