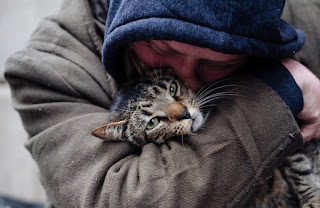 Just letting the audiences know, this film is part of the Dallas International Film Festival this year in 2021. Cat Daddies is a simple documentary that talks about a group of men who want to share their love for cats as they explain about how having a cat has really changed and impacted their lives. This film also focuses on a man named David Giovanni who is currently living on the streets of New York and is determined to stay together with his beloved cat, Lucky. As he is granted a home in the housing facility that accepts cats, the COVID-19 pandemic and his medical diagnosis of a tumor have put him at risk, leaving him uncertain about his future together with Lucky.

This documentary is directed by Mye Hoang who is a filmmaker directing short films and narrative feature films, including Man From Reno, released in 2015. She was also the founder and former director of Asian Film Festival in Dallas, TX and was the former artistic director for the San Diego Asian Film Festival. She is set to co-produced her on the upcoming documentary feature Ashima featuring acclaimed Japanese American rock climber Ashima Shiraishi, which will be released in 2022.

Under Hoang’s direction, she puts her camera-shooting skills into subtle but separate-balancing story structures for several cat lovers in their different occupations. This includes those who are actors, tech workers, truck drivers, firefighters, homeless folks, and others to see how they have changed their lives with cats. With her collaboration with editor Dave Boyle, Hoang herself manages to organize the screentimes for several cat dads on explaining the details and lifestyles, putting her camera-shooting and storytelling professionalism to the rightful direction. Her skills and expertise make me want to experience more by seeing and hearing people’s voices. Hoang even added some COVID-19 settings for an extra boost to their cat-loving experience.

Despite some good cat-living stories being shattered around and with this string of riveting cinematography, this film seems strenuous to look upon that prevented me from liking this movie given the fact that this film has been shot during the pandemic where people have been forced to stay home and not go anywhere. But despite going against the government's warnings about certain risks of going out, the documentary team tediously managed to commit themselves to editing, filming, and finding the right vessel for their scenes regardless of the arduous hard work and laborious dedication they put through.

I know I'm not a cat person, but I say Cat Daddies is a good documentary movie, maybe not as distinguishable as it should be. It clocks in at almost 90 minutes, which is an average time length of a plethora of documentary films. The director and the crew have outdid themselves full of confidence, not incompetence. Despite being a recipient for various film festivals, it is a must, especially for cat lovers out there. Of course, any documentary film or any indie film can be filled with less enthusiasm, but depending on how well you view any films, this documentary film is one of those films you need to consider. Trust me, if you noticed me, I have seen far greater and far worse when it comes to movies. Once the film is up in public, you will get a good, cute “aww” on your face.