The Electrical Life Of Louis Wain 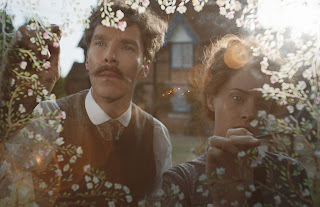 To those who are not familiar with who Louis Wain is, he was an English artist known for his drawings of anthropomorphized large-eyed cats and kittens. He, however, was later confined to mental institutions and was alleged to have suffered from schizophrenia. The Electrical Life Of Louis Wain has been showcased as part of the Telluride Film Festival, marking Will Sharpe’s first solo directorial debut after co-directing Black Pond and his British-comedy drama Flowers. The film stars Benedict Cumberbatch, Claire Foy, Andrea Riseborough, and Toby Jones.

The Electrical Life Of Louis Wain is a biography-drama film that depicts the life of an English artist Louis Wain who rose to prominence for his surreal, artistic cat paintings in the late 19th century. English actor Benedict Cumberbatch (Doctor Strange, Avengers: Infinity War) stars in the film as the English artist Louis Wain. His performance is reminiscent of The Imitation Game, released in 2014, as Cumberbatch's performance that really reminded me of his character as Alan Turing (from that said film). In addition, Cumberbatch’s acting performance perhaps is the one thing he can turn both Alan Turing's life and Louis Wain's life around, full of obstacles. He even provides some references from The Imitation Game and 2017’s Loving Vincent on and off, which gives the film some bonus points. His acting is so genuine and vulnerable, especially on the emotional, dramatic, and tragic scenes being shown in the film where the camera is mainly focusing on his face and not his entire body. Claire Foy (The Crown) stands in on Louis Wain’s side as Emily-Caroline Wain, Louis’ wife. Her acting as a supportive character to the titular character seems very nice and very subtle, compared to Cumberbatch’s performance in the film. She really knows how to act in a serious and timely manner, providing some strong chemistry with him on the set. The chemistry and the heartwarming scenes with Claire Foy and Benedict Cumberbatch are very cute together. My main thoughts about this film is that, out of all the leading English actresses who shared the screen time with Cumberbatch, Claire is the one he has the most brilliant chemistry towards.

Just letting the viewers know that this film is completely shot in the 4:3 aspect ratio, which is much too enjoyable to see. With Will Sharpe’s direction, the cinematography is magnificent and the film is visually stunning as the crews take many shots that look like actual paintings. Sometimes, this film feels like it’s a "Wes Anderson film" (or Loving Vincent to that effect) due to the narrative styles, the camera movements, the set designs, and the cinematography. Even Arthur Sharpe’s music adds much perspective on flavoring Wes Anderson's movies for inspiration. While the film and Sharpe’s direction are spontaneous and hilarious to watch, the story falls bland since there are some confusing, yet darker images that became the highlights the healthy buckets of grief, intolerance, PTSD, and mental illness being spilled all over the film, mostly on the second half (though, no CGI is used in the film). This is where we get to see the Louis Wain character being centered on the film's entirety.

Not only the acting cast did a terrific job, the costume design, set design, and hair and makeup styling are very well made throughout the film, which really surprised me into thinking about what struggling-human life can be while living in the 1800s and 1900s, especially at the end when all the characters grew old together in one, colorful drama feature film.

Clocking in at almost two hours, The Electrical Life Of Louis Wain is ok, though you need to be careful about this film as this is a bit harder and tougher to watch. Cumberbatch and Foy really outdid themselves and so does the director on choosing to work on this project about someone’s life in such a motivating biopic. However, this string of failures like this bland storytelling, the dark images being installed, and the whimsical-gritty writings prevented me from liking this movie. To be honest, this movie captures the eyes for Oscar or Golden Globe nomination, but let’s see how it turns out.