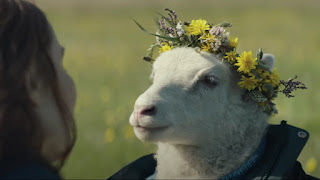 The less said about “Lamb” the better. In multiple interpretations of the phrase. Those who will enjoy the film are going to want to know as little as possible before viewing it. As for everyone else, and I expect most people will fall into this camp, “Lamb” is one you’ll want to avoid. Then again, perhaps the more curious will want to Google the movie to discover its more absurd angles.

Director Valdimar Jóhannsson’s film defies genre classification. It’s part drama, part folk tale, and part horror movie. Although, none of those really describe what’s in store for the viewer. Maybe this is really a comedy, of sorts, and the joke is on the audience for viewing it.

So, how do I review this movie without spoiling anything? I don’t think any discussion of the plot (what little there is) would be appropriate. But, to give some background, Noomi Rapace and Hilmir Snær Guðnason star as Maria and Ingvar, respectively. They are a young childless couple who run a farm in Iceland. There are a lot of sheep and Ingvar’s brother, Pétur (Björn Hlynur Haraldsson), enters the picture about halfway through. He, at least, vocalizes the audience’s reaction.

The whole affair feels rather pointless. “Lamb” plods along for most of its runtime with nothing to say, unless there is some deeper meaning that just went right over my head. I guess one could argue that there are themes about infertility, infidelity, and animal abuse. Any discussion of themes would be pure conjecture on the part of the viewer because there really isn’t enough to read between the lines. Ideas are presented but not sufficiently explored to be meaningful.

“Lamb” moves at an extremely slow pace, grinding nearly to a halt in the second half. The mood throughout is very foreboding including a lot of scenic shots laid over with deep, heavy breathing, implying that this is all going to build to some dark and twisted end. Well, it does; but if you were expecting a horrific moment that would make this watch worthwhile, prepare to be disappointed because it’s a pretty dumb ending.

The best thing I can say about “Lamb” is that it’s got some terrific photography from cinematographer Eli Arenson. In fact, that would be my sole reason for recommending that anyone see this movie. Arenson captures the foreboding atmosphere perfectly through the gloomy, fog-shrouded landscape. Too bad there is some questionable CGI.

Ultimately, “Lamb” goes nowhere and does nothing. It festers in its own ridiculousness and fails to keep the audience engaged.


Posted by Dallas Movie Screenings at 11:23 AM