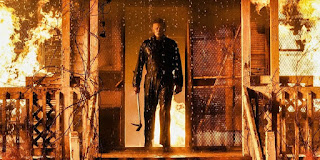 This one is brutal as all get out. “Halloween Kills” is a direct follow-up to John Carpenter’s amazing 1978 tale that essentially updated the serial killer genre for the past forty years.

Carpenter is not involved with anything behind the camera on this go around. With “Halloween Kills, he takes the composer route with son Cody, who contributes with father John.

Instead it is David Gordon Green who got the last subtle turn out of Nicolas Cage with “Joe,” a 2013 release his caregiver tale about an ex-con trying to go the straight and narrow path in his life. He becomes friends with youth Tye Sheridan and strike a strong bond with the young lad.

Jamie Lee Curtis returns as former babysitter and now grandmother Laurie Strode. She thinks she has defeated Michael Myers, the boogeyman of the small town of, subiurban IL.

Also mmaking an appearence as the elder Anthony Michael Hall as youth Tommy Doyle. His character was mentioned in the earlier movies, but now he is all grown up. Remember Hall from his time with the John Hughes directed "Sixteen Candles" (1983) and "The Breakfast Club" (1985).

Also of note is the Michael Myers mask. It is just an old William Shatner mask the prop department and directot John Carpenter picked up at their local drugstoire. Never in a million years did anyone think that such an odd choice would reasonate four decades lkater.

Also worth mentioning is the appearence of the Silver Shamrock masks that made an appearence in the one part of the "Halloween" universe with "Halloween III: Season the Witch." For some unknown reason, a lot of characters in this movie perish with various individuals sporting the mask. I think producer and co creator Jason Blum has the idea that this will be his next foray inmto the franchise with an update of that on his horizon.