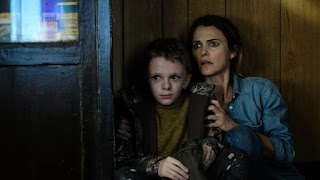 After an incident at a mine, young, scrawny Lucas (Jeremy T. Thomas) is left living alone with an unseen beast confined to a room, locked up tight by multiple bolts, in his house. Lucas’s teacher, Julia (Keri Russell), suspects something is wrong after Lucas reads her class a story he wrote (and after she sees the grisly drawings that go with the story). Julia and her brother, Paul (Jesse Plemons), were subjected to abuse by their father as children. Suspecting the worst, she tries to convince Paul, now the sheriff, to aid her in helping Lucas. However, Julia finds that she and the town are caught up in something over their heads.

Director/cowriter Scott Cooper’s “Antlers” delves into dark themes – drugs, abuse, and neglect – that keep it from being breezy B-movie material. Viewers looking for an escapist horror movie need to look somewhere else. There’s no fun to be had here. “Antlers” is bleak and dreary. It’s obvious, things are not going to turn out ok for these characters.

Like many modern horror movies, “Antlers” uses its monster as a metaphor, but the metaphor of “Antlers” isn’t exactly clear. From the themes presented in the movie, it’s obvious that Cooper and company want the viewer to think deeper about what’s unfolding on the screen. What does the mythology of this creature have to say about the characters in the film? Was it attracted to this dying town and its desperate families?

As with multiple other horror movies, the film relies on its characters making dumb choices. For instance, Julia convinces her school’s principal (played by Amy Madigan) to go check on Lucas’s family. She’s already been warned something is wrong, and there is obviously something not right about the house when she gets there, but she still goes inside. It’s an event that caused the entire audience to groan in frustrated annoyance. Nothing good is going to come from this choice. While the sequence is moronic, it does help to propel the narrative forward.

Because of things like the aforementioned scene, Cooper’s film is probably going to be a divisive work. It’s not necessarily a bad movie but its individual elements don’t totally connect in a way that provide a coherent work. If you are able to ignore some of the dumber elements, “Antlers” is a fairly good movie. Those looking for something to analyze will probably be more satisfied than others.