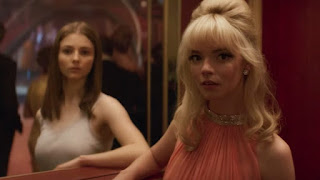 Last Night in Soho, as a movie title, is a very apt description for the way the movie, makes you feel. The whole movie feels like a bad hangover that won’t go away from a party that left you it tatters. There were great high highs and extremely low lows. It’s a film that I won’t soon forget no matter how hard I try or maybe not even want to.

Directed by boy wonder, now grown up, Edgar Wright, with a script by Edgar and Krysty Wilson-Cairns, the film is essentially Edgars’ version of the Tarantino classic, Once upon a time in Hollywood, with a little Touch of Evil thrown in for good measure.. less humor and more horror and thrills. He transformed a small block into 1960s Soho in his native London, and while he does not have the Hollywood leads known to the typical American audience, the hip ones will get it all the 1960s British cinema cameos. His exciting storytelling lets you know he’s giving a joyful wink at his previous movies (Shaun of the Dead and Scott Pilgrim among others) with each frame, and mischievously straps you in like a demented ride operator, the second our protagonist’s story really gets going. The excellent camera work by Chung Hoon Chung, also helps in bringing us straight into the glitz, glamour and seedy underbelly of 1960s Soho.

The movie opens with our young protagonist Eloise Cooper, or ‘Ellie’ played innocently by Thomasin McKenzie; dancing to vocal duo Peter and Gordon’s 1964 hit, “A World Without Love,” in her best Audrey Hepburn glee. She has been raised by her grandmother to love everything 1960s, after her young mother traveled to London for school, and subsequently committed suicide. Ellie’s grandmother, played by British 1960’s screen legend, Rita Tushingham an apt casting if there ever was one, as she starred in the 1960s classic, A Taste of Honey. Naturally her grandmother is concerned and tells her every second “London can be a lot.” It is alluded that Ellie’s family had a history of schizophrenia and Ellie begins to shows signs as well, as she sees her actual mother in a mirror reflection besides her own. Ellie blindly ignores all her grandmothers’ warnings and decides to carry on no matter what.

Ellie is waiting on an acceptance letter to attend Fashion School in London and plans to become a worldly fashion designer, and nothing will get in her way. She soon receives the letter and is off to modern day London. However, she soon encounters a terrible dorm roommate, and quickly finds a way out via an old landlord, (played by 1960s queen Diana Rigg in her last onscreen performance,) Ms. Collins, who offers her an upstairs room that triggers her schizophrenia and an unknown type of sixth sense while listening to her favorite 1960s records. These combined diseases send her spiraling into a fantasy or real life experience as a 1960s chanteuse via ‘Sandie’ (Anya Taylor Joy).

The rollercoaster begins with Ellie going every night after class into Sandie’s world of 1960s swinging Soho. However, it soon turns darker as Sandie’s ‘reality’ of how to really make it, gets closer and closer to Ellie’s ‘reality,’ as Sandie meets the charming Jack (played by (Matt Smith), as her singing dreams begin to no longer be his top priority.

Even when Ellie begins to find herself in her work, the darkness of Sandie’s real life, begins to affect her, and her private life. She meets a nice boy who initially stole her soda at a dorm party, John (played by Michael Ajao) and later replaces the soda with an apology. A date finally happens, but it’s too late. Ellie is tormented at every turn by the men Sandie must please, now turned into walking faceless monsters, in her new role as an escort, in the lowest ring. The date coincides with a nite cap, and during the session, she witnesses the death of Sandie by Jack right in her own bed she is making out with John.

This scene is a little innocently racist unfortunately, and the effect is completely misinterpreted by the filmmaker. The rest of the movie is a thrill ride that will leave you breathless with a very happy ending. A few might be wanting more, but this reviewer had his fill. A great Halloween movie that will surely scare you into reminding you of the horror and glamour of 1960s Soho.

Posted by Dallas Movie Screenings at 9:49 AM