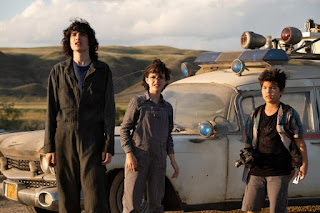 Ghostbusters: Afterlife shoots and scores over its predecessors, but not the classic version.

Ghostbusters fans and audiences have been waiting for this long-awaited direct sequel for years after witnessing the critical and box-office failure of the recent, god-awful Ghostbusters reboot. Jason Reitman, the son of the legendary film director Ivan Reitman who has directed the original Ghostbusters film and its 1989 sequel, decides to take his father’s footsteps to helm this sequel, featuring the franchise’s newer cast of Carrie Coon, Finn Wolfhard, Mckenna Grace, and Paul Rudd.

Ghostbusters: Afterlife focuses on a single mother and her two children who are moving to a small town in Summerville, Oklahoma, where they experienced a series of unexplained earthquakes and other supernatural events before discovering their deep connection to the original Ghostbusters and their grandfather's secret legacy he left behind.

Finn Wolfhard (Stranger Things) and Mckenna Grace (Disney Channel’s Crash & Bernstein) received their main roles as Trevor and Phoebe while actress Carrie Coon (HBO’s The Leftovers, Fargo) appears on their side as Callie, a Trevor and Phoebe’s single mother who is revealed to be daughter of the original Ghostbusters member Dr. Egon Spengler. All three are great as they are doing their best to act and make themselves comfortable when appearing in a scary movie or supernatural television series (like Stranger Things, Child’s Play, etc.), for which is something Wolfhard, Grace, and Coon took much influence on. Even though acting is difficult in many scenes in the film, they both look like they’re getting used to it as they want their characters to be well-characterized and useful to the plot under Jason Reitman’s behest.

The film slowly turns its head towards the “Sexiest Man Alive'' Paul Rudd (Marvel’s Ant-Man, Avengers: Endgame) who receives his comedic role as Phoebe’s teacher Gary Grooberson under Jason Reotman’s wishes to add some comedy for the film’s background and for some story structure buildups for the other three main actors onscreen. He’s very funny and talented in the film as he tries his darndest to provide some comedy and nostalgic chills in the background. Though, my mind certainly wishes that Paul Rudd gets a little more screen time just to be contributive to the fellow cast members.

Jason Reitman is the director of the film while his father, Ivan, serves as the producer of the film, giving an absolute refresh to the Ghostbusters franchise in order to preserve its enduring legacy. He did a good job, given the great responsibility he had with this film. He looks like he is serious, but well-meaningful on how the franchise impacted him so much, so he decided to get involved in this newly formed Ghostbusters film if any comes to mind with greater ideas. Some ideas are very bright and innovative, making me think that his precious ideas look like they are all actually recycled or unused ideas from the previous films. The first hour and a half is very smooth and beautiful, filled with laugh-out-loud jokes, and suspenseful scenes. Even the nostalgic tones and music from Rob Simonsen are pretty spot on.

However, there are some of the main disappointing parts of the story: the second half threw me off due to the incohesive plot, the last half hour of the film has lost it’s magic bit by bit as the last story arc replicates the first film’s climax at the end, and the usages of fan service and archival recordings are something that needs to be taken away. This is one major footstep the director has taken account of out of respect for his father’s legacy.

With some laughs and some elements of surprise being present, Ghostbusters: Afterlife is ok, but not as better as the original 1984 film. It clocks in at least two hours, but it was worth the wait, more fun and exciting than the underappreciated Ghostbusters II and that disgusted reboot version. Jason Reitman and the cast really did a great job and so does the original cast who came in at a surprising timing. Regardless of the disappointments I have on this film, it was a good story, seeing how actors can make their characters more interesting to see and lots of winks from the first movie being displayed right there. You really should see it, it’s a must.