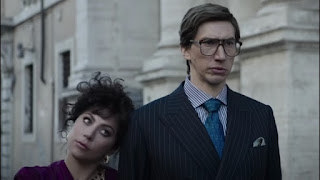 House of Gucci is a downright crime-thrilling spectacle!

People have mixed feelings whether some films will be a hit or a miss, regardless of them being Oscar contenders circling around social media and the news outlets. People are going to think it’s a good movie, but later change their opinions about any film in particular. They would ask whether who knew crime-thriller films can be so anticipating to those who have brought a lot of Oscar buzz on this film along with several other films that have been Oscar contenders for the upcoming Academy Awards ceremony. Just to be on the safe side, this film contains lots of violence, strong language, dark-thrilling tones, and some nudity. Director Ridley Scott fully commits on completing another film slated for this year’s release and that is House of Gucci. The film features the stars Lady Gaga and Adam Driver.

House of Gucci follows a young woman and outsider named Patrizia Reggiani who marries a man named Maurizio Gucci, the grandson of Gucci founder Guccio Gucci, to make her way to the Italian rich label. Though, the relationship troubles the two as her big problem is that due to her being an outsider not being fit for a huge controll of the Gucci heir, her unscrupulous ambition begins to unravel the Gucci legacy and mystery as her romance with Maurizio triggers a reckless plethora of betrayal, decadence, thriller, revenge, and murder.

Singer and actress Lady Gaga (A Star is Born) receives her meatier, protagonist role as female outsider Patrizia Reggiani while Adam Driver (Marriage Story, Star Wars sequel trilogy) is given his supportive role as Maurizio Gucci, Reggiani’s husband and the grandson of Gucci founder Guccio Gucci. Gaga is beautiful, dignified, subtle, and more serious in her role with suspenseful twists as the film progresses, fighting for her own honor and glory against all odds. Her performance gives me some guidance to learn how and what any ordinary actor or actress can do on the set from start to finish. From my ways of viewing this, basically, she is like the female James Bond. Even more so, Adam Driver is also great, supporting Gaga's side behind her back. At first, he seems like a ladies’ man to some female actresses based on his previous films, but overall, he looks like he is having the time of his life as he took his role more seriously and cunning but with a side of comedy and ambition being added. And what stands out is the stunning chemistry between Gaga and Driver that references the past relationship between Kim Kardashian and Kanye West respectively.

Based on the book The House of Gucci: A Sensational Story of Murder, Madness, Glamour, and Greed, written by Sara Gay Forden, Ridley Scott is the director of the film, marking this his second directorial duty in 2021 following The Last Duel. To those who don't know Scott, he is one of the legendary filmmakers in the world. His directorial credits on his movie resume include 1979’s Alien, Blade Runner, Gladiator, and The Martian. As director for this film, he proves once again that an English director is one of those cinematic-driven forces on Hollywood that manages to make the films of the big studios interesting productions, but at the same time, his films are spectacular enough to become a crowd-pleaser to both fans and critics all over of any Hollywood cinematic productions.

This film is much like a gangster film, possibly due to having Italian characters in it as if this is a film featuring the Italian Mafia. Despite the news about the real-life Gucci family’s disgust and disapproval about this film, the production has all its values, the characteristics, the elements, and the basics of the Gucci family and a Ridley Scott flick, but the story is too emotionless and empty. On the upside, the setting and the cinematography have brought a lot of vision for a real-life family of a founder of any business. As with many similar events that have happened, Scott is trying his best to bring out the strong acting Gucci cast while trying to be truly accurate to the Gucci family history. The perspectives on this case are relatively different not only between the participants but also between those who discuss and interpret the events, both now and in the Gucci family history, but which is something that needs more work than it meets the eye. The pacing and the time lengths are also the biggest issues.

House of Gucci is ok, just a typical movie with nice feminist cinema root to it, though it’s very hard to watch as this film clocks in at 157 minutes. I wasn’t keen to try this, but I think the director and the main cast of the Gucci family really outshine themselves onscreen, but Lady Gaga killed it all as a leading actress as she is who or what really makes this film fascinating to enjoy that eventually became one of the leading frontrunners for the Oscar nomination for acting. At first, almost everything else is glamorous, but the uncomfortable storytelling and the unconventional downfalls from this film are highly preventable to see, even the director can’t save the mess.

Posted by Dallas Movie Screenings at 10:47 AM