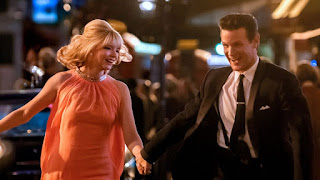 With aspirations of becoming a fashion designer, Eloise (Thomasin McKenzie), aka Ellie, moves to London to attend college. She’s a small-town girl, out of her element in the big city, with a history of mental illness in her family – her mother (Aimee Cassettari) committed suicide – making her grandmother (Rita Tushingham) worry about the move. Her grandmother also comments about Ellie’s gift – she’s subject to visions, mainly seeing her dead mother in mirrors, introducing viewers early on to some “supernatural” elements. More on why that’s in quotes later, though you can probably guess the implications…

Of course, things in London get off to a shaky start. Ellie’s harassed by her cab driver, and she doesn’t get along with her roommate (Synnøve Karlsen), though to be fair her roommate is pretty awful. So, Ellie decides to rent a room from landlady Ms. Collins (Diana Rigg), a formidable woman with a no-nonsense policy. Shortly after renting the room, Ellie begins having visions of 1960s era Soho featuring a wannabe singer, Sandie (Anya Taylor-Joy), and the man, Jack (Matt Smith), who is helping her start her career.

In “Last Night in Soho,” director/co-writer Edgar Wright plays up multiple angles. How are we supposed to take Ellie’s sudden visions of the 60s? Are we to believe that she’s actually seeing events from a time before she existed or is this the start of a mental snap caused by an abrupt and massive change in her living environment?

Wright, whose movies are known for their over-the-top theatricality, plays things straight here. Despite the use of visions, and ghostly apparitions that appear later, the film never shifts into campy territory. Presented as more of a whodunit in the trailer, “Last Night in Soho” is actually more of an is-she-or-is-she-not going insane type movie. The photography, frequently tinged with neon colors, and soundtrack of 60s hits bring the viewer into Ellie’s quickly twisting world.

McKenzie does an excellent job of making the viewer question her character’s sanity. She’s wide-eyed and frantic most of the movie. Although, she comes across as a bit too whiny/timid at times, making the character a little annoying. Taylor-Joy’s Sandie is an attention-seeker. She’s sure, confident, playful, and unfortunately, finds herself in a situation that gets out of her control, all moods perfectly captured by Taylor-Joy. Ellie finds inspiration in Sandie, who begins influencing her physical appearance and her coursework.

So, why such a lukewarm reaction if most of the individual elements didn’t bother me? There’s just something about this film that didn’t quite land with me. Maybe part of it is disappointment in the lack of a whodunit storyline, in which case that’s on me. The ghosts that start to follow Ellie felt a little goofy despite the seriousness with which they are presented. Everything leads to a final showdown that’s reminiscent of Polanski’s “Repulsion,” which could further play into the insane angle. Except, I don’t think Wright is going for a layered movie here. This is one that’s meant to be taken at surface level. The final 30 minutes or so don’t do the movie any favors. I think it’s this section that really drags the film down, tying things up a bit too perfectly and abruptly.

Posted by Dallas Movie Screenings at 10:17 AM