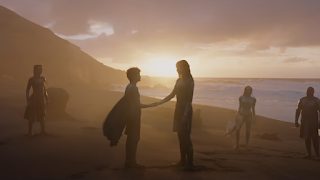 Marvel’s Eternals has its name but is flawed on every heartfelt moment.

Marvel Studios never fails to bring the excitement towards fans since the 2008 release of Iron Man. In fact, the studio’s main goal is to expand their own MCU rigorously and the only way to do that is to introduce newer characters and superheroes along the way. To answer that question, Eternals has a lot of them. With the characters created by Jack Kirby, Academy Award winner Chloé Zhao enters the Marvel Universe to direct the film, featuring the ensemble cast of Gemma Chan, Richard Madden, Kumail Nanjiani, Lia McHugh, Brian Tyree Henry, Lauren Ridloff, Barry Keoghan, Don Lee, Harish Patel, Kit Harington, Salma Hayek, and Angelina Jolie.

Eternals takes place after Avengers: Endgame and follows the group called the Eternals, an immortal alien race created by the Celestials who have secretly lived on Earth for over 7,000 years, whose main mission is to reunite in order to protect humanity from their evil, dreadful counterparts, known as the Deviants.

Actress Gemma Chan (Crazy Rich Asians) is the leading star of the film as Sersi, a member of the Eternals with a strong sense of connection to humans and the Earth. This is Chan’s second MCU film has starred in, the first being Captain Marvel where she played Minn-Erva. As a leading actress, Chan has worked her way up from reaching the top of her acting gig after her experience with Captain Marvel, she knows the pros and cons on portraying whatever part she gets, whether it's a superhero or supervillain or just a regular character onscreen. It’s not a real crime to look upon the eyes of Gemma Chan’s acting performances, but if one can dig into it, one can always be sure that this movie is Chan’s own film rather than an ensemble film based on what the script says. And not only Chan herself, but Scottish actor Richard Madden (Bodyguard, Game of Thrones) just comes and goes as Ikaris, a powerful Eternal supporting Chan’s Sersi character. Not only does Madden keep his supportive-superhero persona going like other Marvel superheroes supporting the protagonists, but his chemistry with Chan onscreen always brings the delectable treat together to make this movie as friendly, and romantic as ever. This is what the colors of any Marvel productions should look like.

As far as storytelling Zhao has to offer, the plot flows smoothly, but later gets messy and uninspirating as every new film featuring new characters and events becomes harder and more desperate for Marvel to fit everything in the MCU. At least, some good visual effects are well done and The Avengers were referenced in the film, but strangely, Thor and his friends from work looked like they don't care when Earth is in danger again. Not really, all points directly towards the Eternals who are now introduced as the new "Thanos" in town doing all the work. And as for Zhao and her massive filmmaking team, they both know there is so much to tell about those characters that went over the storyline, even though those 150 minutes don’t seem pleasant enough, there are a lot of good things, including the exciting locations, to see.

The rest of Eternals' actors did a great job despite receiving some smaller key roles. We have a show stealer Kumail Nanjiani (Silicon Valley, The Big Sick) as Kingo, Lia McHugh (American Woman) as Sprite, Brian Tyree Henry (FX’s Atlanta) as Phastos (which marks the first MCU superhero to be depictedly gay), Lauren Ridloff (The Walking Dead) as Makkari, Barry Keoghan (Calm with Horses) as Druig, Don Lee (Train to Busan) as Gilgamesh, Harish Patel (Four Weddings and a Funeral) as Karun, Kit Harington (Game of Thrones) as Dane Whitman, and Salma Hayek (Frida) as Ajak.

And lastly, we have Academy Award winner Angelina Jolie (Girl, Interrupted, Maleficent) has a surprisingly small role as Thena, the elite Eternal warrior. Like the rest of the cast, she does a great job on her acting part, trying to improve her worth on the MCU family. However, there's a lot of focus that deserves more attention, given the fact that she and some actors are only there to play small parts and not big ones. It seems pretty low that this film doesn’t have any balance on any of those actors, but perhaps it would be best if they chose cameo actors and actresses.

I’m very mixed about Eternals, but it’s not a bad movie or a good movie entirely, it’s just average, maybe putting on the mediocre section. Despite some wonderful visuals being showcased and the wonderful acting team, it’s sad to see that this film didn't reach the grading levels of Iron Man, Avengers: Endgame, or Shang-Chi. And the time length is probably the biggest issue right there, clocking into 156 minutes long. It’s way too long but still entertaining in the director and the cast’s own right. I thought I was excited for this one, but my long-awaited enthusiasm really backfires. And that is all I’m going to say, I can’t give out more details on this movie, but I think this MCU film is something people have to pass up on this opportunity. I really want to like this film, but the pacing, the time length, and the script-writing issues discouraged me from liking this film.

Posted by Dallas Movie Screenings at 10:25 AM