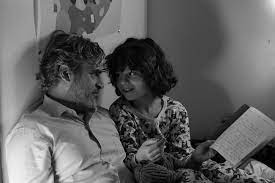 A24 is known for making incredible low-budget films and Oscar-winning films. C'mon C'mon is a typical coming-of-age movie that not only focuses on characters, but also their ways of learning, feeling, and imagining things. It doesn't have to be anyone’s slice of life story, it can be a story in your own way of living at a certain point of time. Oscar nominee and filmmaker Mike Mills steps to his game to helm this feature film, shot in black-and-white, featuring the stars of Joaquin Phoenix, Gaby Hofmann, and Woody Norman.

Mike Mills' newest feature film C'mon C'mon follows a radio journalist, Johnny, who embarks on a cross-country trip with his young nephew, Jesse, to interview some children in different cities.

Oscar winner Joaquin Phoenix (Joker) stars in the film as Johnny, the radio journalist and Jesse’s uncle while Woody Norman appears supportively as Jesse. If you don’t know Joaquin, he recently won his Oscar for portraying Arthur Fleck/The Joker in Joker back in 2019. As an actor, he got used to this and despite being an uncle to a nephew, it felt like he serves as the father-figure to Woody Norman’s Jesse character, who is a genuine human being that has found warmth and struggle in this newfound connection. Being with him is cozy and relaxing, even in the most challenging moments, but the main event for the film’s climax is Woody Norman. He brings the voice of reasons for his acting skills and Joaquin’s screentime with him. The relationship between these two characters is very subtle and smooth which references a father or mother having a difficult relationship with a child with autism. This is something that triggers the father-and-son (or mother-and-daughter) moments right there.

To those who are not familiar with Mike Mills, he is known for directing 20th Century Women, for which he earned his Oscar nomination for Best Original Screenplay. As a director for C'mon C'mon, his idealistic style of making a film about ideas and not storywise either works for you or doesn't in many different ways. Once his idea has been thrown out on his sheet of paper, he knows there's always room for lots of storytelling ideas out there. He even made the characters interact with the world around them to create a slice-of-life story (or simply what-am-I-doing? moments), which is the ultimate goal for any filmmakers and actual media journalists out there. As mentioned before, slice of life isn’t for everyone just as movies aren’t for everyone. Slice of life is just anyone’s thing.

The story is very pleasing despite the film being shot in black-and-white for the favor of the plot. It does have some emotional breakdowns that really enhanced myself. Even with the slower, pacing moments are added and the parts that felt insignificant to the film’s plot, these moments and scenes are enjoyable as every moment is meant to be cherished. What can be more relaxing and satisfying is that Joaquin Phoenix and the crew actually went out and interviewed actual kids in different locations. So, kudos to the screenplay writers who made all possible and for making these actual kids amazing at acting. It almost seems like Joaquin Phoenix is actually portraying as Joaquin Phoenix rather than using his character name. The film also references many texts and songs throughout for us to remember for ourselves.

Also appearing in the film are Gaby Hofmann (Amazon Studios’ Transparent) who plays Jesse's mother Viv, Dallas-born actor Scoot McNairy (12 Years of Slave) as Paul, Molly Webster as Roxanne, and Jaboukie Young-White as Fernando. All of the acting suddenly hits in a deep, genuine way where anyone can hardly forget they're actually acting onscreen.

C'mon C'mon is a good coming-of-age movie, trailing up to 108 minutes of the film’s runtime. It captures many aspects of emotions and life that just simply come and go around us in a way like no other human beings. Joaquin Phoenix really fit the bill and so does Woody Norman thanks to Mike Mills and the incredible script-writers on bringing some warmful dysfunctional-family moments and coming-of-age sceneries. As an autistic, I felt confidentiality connected to the story and didn't want it to end this way. Everything feels comforting, even the way Joaquin captures each scene and city that feel like a wonderful new experience because it's a visceral experience that everyone should have everyday in their daily lives.