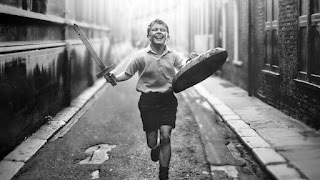 Kenneth Branagh’s Belfast is the wondrous tale of childhood and humanhood.

To those who don’t know Kenneth Branagh, he’s one of the most-respected British film directors and actors of all-time for both British and American cinema. Of course, he was nominated for tons of Oscars and Golden Globes, but has never won one of each. Though, he certainly enjoys making movies and never gives up on his fans, actors, and filmmakers who idolized him while studying and watching movies at home or in theaters in different cities. This film features the cast of Caitriona Balfe, Jamie Dornan, Judi Dench, Ciarán Hinds, and newcomer Jude Hill.

Belfast follows the story of that chronicles the life of a working class family and their young son's childhood during the era of what is called “The Troubles” in Belfast, Northern Ireland in the late 1960s.

Actor Jude Hill is the main protagonist as Buddy, a little young boy who comes from a small-town family, experiences life in tumultuous times. Then, actor Jamie Dornan (Fifty Shades films) portrays Buddy's father while actress Caitriona Balfe (Starz’s Outlander) portrays Buddy’s mother in the film. Their performances are outstanding, giving the film lots of bonus points. With my huge tastes and likes of Caitriona Balfe, Jamie Dornan, and Jude Hill, you're in for some great acting treat right there. Dornan is great but is more serious in his role to understand his character wisely without failing onscreen while Balfe, on the other hand, sounded like she is also having fun with the cast of actors and looks like she is having the time of her life. But for the film’s entirety, it was Jude Hill who took all the acting shots.

As director, Kenneth Branaugh has really taken verbal, autobiographical accounts from his own personal childhood. Surely he's a great actor and a filmmaker and all, but what can you expect from him when it comes to filmmaking. Everything you've ever seen from him has either been okay, great, or just disappointing in your own opinion. My main guess is that he has never, ever made anything as personal as this. With the story being nearly auto-biographical, there’s a whole lot out of this world on what Branaugh has to offer. He makes this film a fun, loving tale where one heavily touches on heavier objects like losses and family hearts. In addition, the music from composer Van Morrison and the screenplay are written astonishingly well, trying to bridge the family-caring moments in dark time periods. To be on a safe side, this movie could very well be considered a buddy (or family) comedy type. Still, the film can be a bit melodramatic.

The rest of the actors are great, but my way of viewing is aimed directly at Academy Award winner Judi Dench (Shakespeare in Love) and Ciarán Hinds (Harry Potter and the Deathly Hallows: Part 2). They are both portrayed as Buddy’s grandparents respectively. Despite having some small screen time, Dench and Hinds really played the perfect grandparents towards the protagonist.

Clocking to simply 97 minutes, Belfast is a heartfelt watch, thanks to the great acting performances, the direction, and good writing. Kenneth Branagh's film, based on a true story from his own perspective, personal childhood, really touches many people' hearts and minds with an intimate view of any average family and the struggles of the working class citizen life. His lead-directing film could have a chance of being a front-runner for Oscar contenders of any category. One last thing before you finish reading this, just a little precaution for all parents and kids that there is some profanity as well as some dark and depressing moments being scattered all over the film. I highly recommend all of you to be emotionally prepared for this before you decide to watch this film. That’s all I’m trying to say.