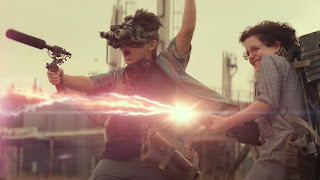 
From afar, Ghostbusters seems an odd movie to shape a nostalgia trip around, but it is almost completely the only thing Ghostbusters: Afterlife has going for it. We live in nostalgic times when it comes to the movies we loved as a kid and the studios willing to make money off of that love, and here is one of the ultimate examples of that phenomenon in effect. The trio of main characters are the progeny of the one original Ghostbuster who could only improbably return for a surprise cameo (Let’s just say the movie finds a way to do that, though). Even the action climax is sort of a redo of the original movie’s conflict resolution, until it becomes a definite redo of that climax.

Until then, the movie is a constant barrage of callbacks to the first film (not so much the second film – though there is no outright ignoring it, as such long-delayed follow-ups are prone to do these days – and thankfully not the misguided remake), not only through the inclusion of various props and tools used by that first quartet but through a basically ineffectual exploration of the legacy of that movie’s events. It certainly feels strange, placing this much significance on such a uniquely silly and slightly overrated 1980s property, but screenwriters Gil Kenan and Jason Reitman (the latter of whom also directed) get lost in that state of looking back. The movie never looks forward at what it could be doing for itself.

The result is a movie that begins with some promise and eventually settles into doing far too little with way too much. We like the central family unit, including single mother Callie (Carrie Coon), her teenage son Trevor (Finn Wolfhard, whose casting is sort of an in-joke that no one acknowledges), and her preteen daughter Phoebe (McKenna Grace, rising so far above the material here that she must simply be a complete natural and a gifted actress). They’ve arrived to claim ownership of a rundown farm, left to Callie by her absentee father. Much of the movie is devoted to concealing who exactly Callie’s father was, but let us only say that his death is not merely a plot point but a necessity. Beyond that, one can do their own math (or simply look at Phoebe’s chosen hairstyle and spectacles) to figure it out very quickly.

Anyway, the kids discover that ghosts haunt this rural Oklahoman town with a vengeance, as Trevor and his new friends, as well as Phoebe and sympathetic teacher Mr. Grooberson (Paul Rudd, very funny in spite of his character’s near-total irrelevance to the plot) discover at the edge of an abandoned oil well atop a mountain. Not much can be said about the threat beyond the tired explanation for it that we had already received in the first movie, but Kenan and Reitman simply repeat what had worked before, with the hopes that lightning might strike twice. Needless to say, it doesn’t, especially as the cogs in the wheel of the plot turn toward a particular brand of familiarity in the noisy, murkily lit action climax.

There are some inspired bits here and there, such as how the finale reintroduces some old heroes, only to make them irrelevant, or an amusingly horrifying scene involving regular-sized versions of the Stay-Puft marshmallow man emerging in a grocery store and proceeding to do unspeakably violent things to each other. It certainly inspires the feeling that Ghostbusters: Afterlife needed more of that kind of risk-taking subversion of our expectations of it. Instead, the movie simply coasts on our nostalgia.