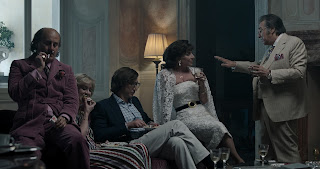 “House of Gucci” is the second Ridley Scott film to be released in the last couple of months. The first, “The Last Duel,” released in early October, is fantastic. It’s a medieval epic, reminiscent of Akira Kurosawa’s “Rashomon,” that sucks the viewer in with its presentation of the same story told from three perspectives. Unfortunately, this review isn’t about that movie. Those hoping for a double whammy of greatness are going to have to check their expectations at the door because “House of Gucci” is, in a word, awful.

I can’t think of a single thing I liked about this movie – I guess the set design and costumes were ok. “House of Gucci” is a film that feels simultaneously too long and hastily made. Scott jumps around with questionable edits and random jumps in time. It’s almost like this is a heavily edited version of a much longer epic. Perhaps this will be another “Kingdom of Heaven” situation and we’ll eventually see a much better director’s cut somewhere down the road. Although, I can’t imagine sitting through a longer edit of this mess.

The jarring edits and illogical time jumps are only one part of the whole of this abysmal picture. This feature’s length, nearly 2 hours and 40 minutes, looms over the viewer’s head as Scott drags us through the rise and fall of Maurizio Gucci (Adam Driver) at the hands of his wife, Patrizia Reggiani (Lady Gaga). Rounding out the rest of the Gucci family are Maurizio’s father, Rodolfo (Jeremy Irons), his uncle, Aldo (Al Pacino), and his cousin Paolo (Jared Leto). Leto’s make-up job looks fantastic – he’s completely unrecognizable in his role.

No one gives a good performance here. Considering the cast, this is close to unbelievable. Yet, these are some of the most ridiculous/horrific portrayals that I have ever seen. Each actor presents their character with outrageous Italian accents. These accents are so bad you can only be left wondering who on the set thought they were going to come across as serious portrayals. The performances themselves frequently delve into over-the-top histrionics, as if each performer is hoping for a Razzie nomination for their work.

Scott is just presenting a bunch of events to the audience. There is never any build-up to what leads to the eventual murder. One second Maurizio and Patrizia seem very happy together then in the next scene Maurizio publicly belittles Patrizia and suddenly can’t seem to stand the sight of her. A former lover is randomly introduced in the previous scene, implying this is the cause of the behavior shift. However, the change is unnaturally abrupt and feels completely out of character.

Salma Hayek portrays a television fortune-teller named Pina that Patrizia frequently visits. Her character comes across as randomly inserted into the story. It’s not until the final scenes that we understand her significance to the Gucci family. There’s little to no development of Hayek’s character or any sort of natural development to the pair’s relationship. I was certainly left wondering why Pina would get involved the way she did.

“House of Gucci” was one of the year-end releases I was most looking forward to seeing. Unfortunately, it’s a bitter disappointment. Good luck to anyone willing to attempt a viewing of this in the theater. It’s long and painful to sit through.