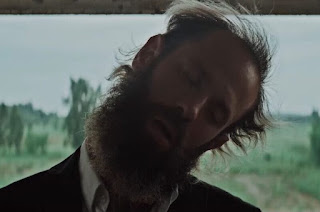 Externo focuses on a powerful businessman and his ways of doing business and dealing with his mental and personal crisis along the way. The powerful businessman reveals to be Joseph as he gives advice regarding success in business and talks about who he is, what he does, what his achievements would be, and to learn how he can handle business in a proper, orderly-fashion manner.

The film consists of a very small cast of actors being present in the film. Writer and director Leandro Taub portrays his main role of Joseph, a power-hungry businessman while Elizabeth Ehrlich appears as a mysterious young woman he meets (in the end credits, her character is credited as “She”). Christian Bargados also appears as Zeta. Leandro’s dramatic acting is incredible, increasing the heights of the character development for Joseph. He is what makes the film intense and surreal for both the film’s plot and Joseph's personality. Even Ehrlich knows how to act while dealing with the main character’s situations.

The film is directed by the Taub brothers, Jonathan and Leandro, with the latter also portraying the main role of Joseph as well. With Taubs’ direction, the film had an extensive use of on-and-off cinematography, wide-open spaces for camera angle shots, and voice-over, having larger usages of voices coming from only Leandro himself and an unseen man (possibly a narrator or something). In addition, subject texts are highly present throughout the film, with a side of fourth-wall breaks, to signal the next chapter and to understand what the characters are trying to say. As the story starts to flow smoothly and consistently, the story arcs soon become tense as Leandro’s character attempts to learn how to resolve the acts of power, corruption, terrorism, and global threats. Most of the time, it was just Leandro talking and being all by himself, walking through places and talking to someone over his phone. As he comes across as an intelligent and determined individual, Leandro knows how to handle his sticky situations, resulting in him being trapped by his own world of desperation. And the way he interacts with the woman looks like he is taking this interrogation-acting too well. This goes to show that Leandro is a one serious-killer actor.

The film is like a documentary film and a foreign language being mixed together, this unusual, but fairly interesting topic focuses on the life of an charming-eccentric individual who explains how his views affect his own life and to others, it also deals with the major themes of business, money and power. There’s not much narrative being shown in the film as this gives some vibes from The Big Short (with Steve Carell in it) and Pinky and the Brain (due to the latter’s goal to take over the world with higher ambitions). The story is split into multiple chapters like a storybook during the majority of its duration; it feels like it’s a class lecture about business and money. Sequences that show him speaking and interacting with a mysterious woman inside a room with limited lighting flooding through the room are also added to give the much needed depth and complexity to the story’s components.

Despite being run down to 83 minutes, Externo is an interesting, unusual piece of work as the film provides a plethora of powerful lessons given from the directors and the small cast about business, power, mental health, and power-hunger. It is filled with drama and intensity that roams around the earth. With great performances by Taub and Ehrlich, a beautiful intensifying score, and the remarkable, colorful cinematography, Externo is a type of a film that deserves much, much attention, worthy, and praise for all crowd pleasers who are watching any low-budget films at home or in theaters out there.