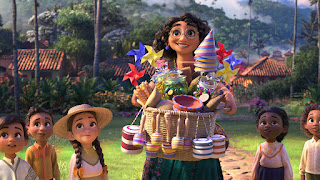 Disney’s Encanto twinkles the magic and music for children and families.

It appears that the Walt Disney empire continues to grow as this film marks the 60th animated feature of the enduring Walt Disney Animation Studios classic lineup, spearheading the legacy and the animation interest for both critics and audiences. Directors Jared Bush and Byron Howard decided to head on over to the studio’s animation division to helm this musical, magical classic tale that will take the fans on a magical journey to the magical worlds of South America. The film features the voice ensemble cast of Stephanie Beatriz, María Cecilia Botero, John Leguizamo, Angie Cepeda, Diane Guererro, Jessica Darrow, Carolina Gaitán, and Wilmer Valderrama.

Disney’s Encanto takes place in a fantasy world of Columbia and centers on Mirabel Madrigal, a young Colombian teenage woman who deals with the frustration of being the only member of her family without any magical powers. However, she soon discovers that magic is in danger and she must go on a perilous journey to save her family and their home when their magic is on the verge of disappearing permanently.

Actress Stephanie Beatriz (Brooklyn Nine-Nine) is the voice of Mirabel Madrigal, a young teenger being the only one in the extended family who doesn’t have or possess any magical powers, leaving her dreadfully frustrated by her peers. As a voice actress, Beatriz is born of the role and she deserves to do lots of animation work as an actress. She even treats her own character as if she is having fun in her role regardless of whether she is good at acting or singing or both.

The story, the animation, and the visuals are highly well-done, thanks to the crackling team of animators and directors Jared Bush and Byron Howard with a license to kill, bringing a lot of colors and a variety of beautyness for the characters, the Madrigal’s house, and the spark from their magical powers. Some marvelous details on the costume designs, the music numbers coming from Lin-Manuel Miranda (Hamilton), and the production design are well-lubricated for that Columbian subject matter. To add to that positive vibe when it comes to storytelling, the film’s subject carries the main themes of family acceptance, reestablishing its harmony, learning to appreciate one another, and even celebrating one another's qualities, whether or not they are extravagant or simple. The directors know that each character in the Madrigal family gets their own personality, which is the main ingredient for character developments. And to top it all off, Encanto isn’t just a story, it’s all about family, music, and magic. With every spell of magic being put together, it’s all about the community coming together to rebuild what’s lost and learn what they can do to fortify one another in the process along the way.

The film bears a striking resemblance from Disney-Pixar’s Coco due to the family themes, the Mexican/South American settings, and the music being the center of attention focally, given the fact that the film’s composer Germaine Franco provided additional music compositions for Pixar’s Coco. His music and the composition score of those music numbers (written by Lin-Manuel Miranda) are astonishing, fitting the genre for the Columbian cultures and boundaries. As the studio continues to grow in terms of diversity, Disney has reached new, greater heights for more diverse representation for its animated features, including recent films like Moana, Raya and the Last Dragon, and Pixar’s Coco.

With the cast, the colors, the music, and the magic being just right, Disney’s Encanto is a wondrous flick, clocking in at least 100 minutes. I really loved it, every scene and sequence right there in front of my eyes. This is probably one of the greatest films I ever watched in 2021. The directors, the animators, and the voice cast (mainly Stephanie Beatriz) truly know how animated films and musicals work on so many levels. This movie is deeply a must, no joke, it’s a guarantee from me. As a die-hard Disney fan, this film clearly recognizes the potential for its animation roots to reach family and friendly audiences on their seats over the holidays with this Thanksgiving release and on Disney+. One more thing, this film is theatrically paired with the short film Far From the Tree, written and directed by Natalie Nourigat, which features a strict but loving raccoon parent who struggles on to protect its family and offspring from harm and danger.