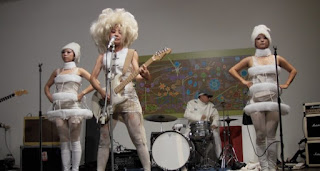 To let you folks know that this documentary film is part of the 2021 Asian Film Festival in Dallas, Texas. Who Is Lun*na Menoh? is an English-Japanese documentary film that follows the life and career of the extraordinary Japanese artist Lun*na Menoh. From her early career in Japan to the underground music scene in Los Angeles, from fashion show runways featuring her sculptural designs to art galleries showing her fantastical work, Lun*na's edgy, witty and beautiful creations are explored.

The film is directed by Jeff Mizushima and produced by Reiko Kondo, Junya Sakino, and Shingo Kidaka. Mizushima crafts this film because he wanted to discover who Lun*na Menoh, as an artist, and understands how she has brought an impact to her friends, her family, and the world on her outlandish artwork and her fashion-designing costumes being made out of recyclable objects after being thrown out in the trash. She and the fashion team know how they took the many trashy items to turn into something creative for models and other fashion designers. Mizushima even took the opportunity to interview her family, gallery owners, models, fans, and fellow visual artists and musicians all over the world to find out who and what Lun*na Menoh is and why her art-crafting artistry forms and fits in the entire world.

Mizushima and his crew not only provided some archival footages on Lun*na Menoh and her history as an artist and a fashion designer, but Mizushima also provided some onscreen, friendly video feedbacks from his fellow friends and colleagues to see if his documentary makings can be as good as any other who criticized him for not providing much more details and information about Lun*na Menoh herself as well as making one’s own video to pass it off as his own rather than rework on his important project, even though, according to him, it took over ten years to develop and craft a story about Lun*na. This is where the film director has jumped the gun on how to produce a decent documentary without missing the marks. Even some of his crew and people being interviewed agreed that his direction and his questions are confusing and are completely off. Nevertheless, Mizushima still had guts and determination!

There are many fourth-walls being broken, which made me believe that Mizushima and his crew are actually filming a documentary film. So basically, it’s a documentary-within-a-documentary film. The director has a snappy Deadpool response to the audiences on how this documentary film is being made without fighting through the clock. It kills me all of the sudden that crafting a documentary film, despite the crew breaking the fourth wall, proves to be harder and harder like making a feature film. They need to have some creative ideas and permission from one’s family to use their recordings, interviews, and photos to ensure the film’s documentation without invading their privacy for their own sipid amusement. Surely, making a movie, even a short film, can be hard too regardless of the time, money, and commitment.

Who Is Lun*na Menoh? is an interesting topic, clocking in at about 80 minutes. Most of the documentary cast and crew really made this piece of work fun and enjoyable. If you don’t know who she is and what she is, you might want to see this when this film gets released to the public. It’s a simple fact that this is like asking who the person [or celebrity] is whether the person is a filmmaker, actor, actress, musician, whatever. It’s a film that reveals secrets to anyone who is interested in knowing and mysteries being solved for those who want to find out. Whether I like it or not, it’s still a fascinating piece to discover. One last thing, please be advised that this documentary film contains swearing in the film.

Email ThisBlogThis!Share to TwitterShare to FacebookShare to Pinterest
Labels: Henry Pham, Who Is Lun*na Menoh?review