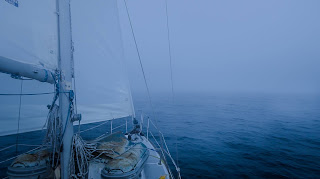 The title is not meant to be confused with Hell or High Seas (the one with Jeff Bridges and Chris Pine starring in it), Hell or High Seas is a documentary film that follows a U.S. Navy veteran Taylor Grieger and writer Stephen O’Shea as they embark on their greatest adventure of a lifetime — sailing around Cape Horn, the world’s most treacherous ocean waters. This documentary is a moving picture focusing on a veteran who uses his own painful journey with PTSD to find the healing source for himself, and to pave a smoother path for veterans who are returning to civilian life.

Taylor Grieger is such an amazing character and a storyteller, he does capture the true nature and the sudden reveal of PTSD for lots of American veterans in a powerful way, along with Stephen O’Shea whom Taylor got to share his adventures with. Most shots throughout the film are absolutely breathtaking, giving the feel as if this is an action-adventure film. The story and the setting fit nicely and so does the usage of social media that expands the story of their perilous journeys. And lastly, the overall beauty that has been garnered throughout the voyage conveyed the colorful, restorative effects of the high-sea journey. However, most of the good, exciting stuff have been cut out due to the documentary time lengths being limited.

The director of the film is Glenn Holsten, under the supervision of producer Chayne Gregg and executive producer Robert Irvine. Holsten and the crew have really dedicated themselves to placing lots of single-shot cameras on the boat to see what Taylor shows on his amazing journey on the ocean waters similar to how the crews from Discovery Channel’s Deadliest Catch (featuring Sig Hansen as the main captain for the show) have ventured through.

Overall, Hell or High Seas is alright, clocking in at 90 minutes for its height and length. This documentary film is more than just a documentary, it’s an adventure film that brings some dark and deeper messages about one’s own life’s greatest mysteries, darkest past, perseverance, and hope. Nevertheless, Taylor and the team have outdid themselves to better understand the beauty and the artistry of any movie (or documentary movie). I’m not a huge documentary movie type of guy, but this is a film other people need to think about watching.

Posted by Dallas Movie Screenings at 10:12 AM