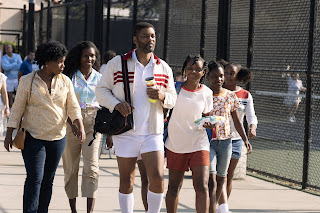 “King Richard,” directed by Reinaldo Marcus Green, is a biopic about Venus and Serena Williams through the eyes of their father, Richard. As you can expect from a sports-related film, it is a story about triumph over adversity due to hard work and perseverance.

Will Smith stars as Richard Williams, father of Venus and Serena – portrayed by Saniyya Sidney and Demi Singleton respectively – and the man who pushed them to become superstars. Smith gives a good performance, showcasing a parent who never lets up on his children. He’s a star example of a helicopter parent – unrelenting, overbearing, and always there. The only thing he wants in life is for his children to have a better future, no matter how abrasive he needs to be. He does make some questionable decisions which make the viewer wonder if he really does have his children’s best interests in mind. Are the girls hooked on tennis just because he’s been forcing the game down their throats?

Starring alongside Smith is Aunjanue Ellis as Oracene Williams. Ellis gives a stellar performance here. She’s the heart of the family. While she always stands by her husband’s side in public view, she’s never afraid to put him in his place when they are in private. Ellis frequently steals the spotlight from Smith, giving an honest performance whether Oracene is happily looking on at her daughters’ successes or fuming mad at what’s going on under her roof.

Green presents the Williams as a happy, supportive family. They are stuck together like glue and always have each other’s backs, offering up a seemingly-never ending supply of support for each other. “King Richard” offers a glimpse of what being a loyal family is like in both happy and troubling times.

Despite this, the film does indirectly raise some questions about Richard and Oracene and their relationship with their other children. There are five daughters (and apparently Richard has more children from other marriages), yet, Richard and Oracene seem largely focused on the success of Venus and Serena. The film briefly highlights the success of the other daughters but otherwise throws them to the side, suggesting they are less significant in their parents’ eyes. This could merely be a case of only having so much screen time to tell the story requiring less focus on other characters. As for Richard’s other children, they are just briefly brought up during a fight with Oracene, further implying that Richard might not be as good a father as the film is making him out to be.

The second half of the movie focuses on Venus as she starts her ascent into tennis history. Initially coached by their father, Paul Cohen (Tony Goldwyn) agrees to take on training Venus alone after Richard talks him into watching the girls play. The hurt and frustration of Serena over this situation is another angle this film could have explored better. Her reactions are shown, but like her other sisters, it seems once Paul starts training Venus, Serena is thrown to the sideline. Eventually, the family signs a contract with trainer Rick Macci (Jon Bernthal) who prepares them for their professional careers.

Overall, “King Richard” is a fine film. While it’s on the long side, it flies by. Green sucks the audience into the story and pulls all the right strings as the viewers cheer for Venus and Serena’s success.