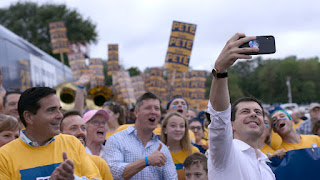 Pete Buttigieg is known for keeping his real life persona close to him and only to those who he trusts. That factor plays into the new Amazon documentary ‘ Mayor Pete’ that premiers on November 12. The documentary, directed by Jesse Moss, is supposed to be a typical behind the scenes documentary about a maverick candidate who proposes new things to shake up the political landscape. Mr. Buttigieg’s maverick qualities being the first gay married man running as a mayor for the presidency.

His presence is more valued than his naive political experience and this documentary shows it, warts, and all. His every supportive husband, Chasten, is actually much more skilled as a speaker and overall politician. This reviewer wonders if this is a trial run for Chasten more than Pete. The presence of the cameras capture the one thing Pete was trying to keep the spotlight from, his sexuality and his relationship, but in those private moments, they really show him as a wonderful husband and companion. It’s in these moments, his ability to lead is showcased for the first time, and it’s very powerful.

The real downside of the documentary was when his day job as mayor gets in the way. A racial shooting of a black man named Eric Logan by a white cop occurs. Pete initially does the typical politician thing of saying they did enough, but he does go back on his statement, and says he could have done more, at the townhall and during an actual debate. The event was a real rarity during a political campaign and ultimately cost him votes and ultimately showed the real disparity among black voters, which led to him losing the democratic nomination.

Pete Buttigieg’s campaign was historic and while was not nominated, the documentary is probably his best campaign video for a second run.