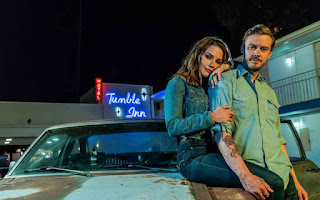 Love stories are something people can easily or hardly handle, but sometimes they’re hard to follow while exploring the recapture of the “boy” character who finds, loses, and gets the girl scenario. This film is spiritually inspired from the song “Just Like Old Times,” written by Todd Snider and serves as Justin Corsbie’s directorial debut as he wants to take any musical love song and turn it into a new form of entertainment for both teenagers and adults around the world. Having been directed by Corsbie himself, the film features the duet of Michael Dorman and Sophia Bush.

Hard Luck Love Song follows the story of a young man named Jesse, a charismatic but down-on-his-luck troubadour living out of cheap motels and making bad decisions. His biggest problems arise when Jesse finds himself at an existential crossroads during a chance encounter with Carla, an old flame of his, as their complicated past and current troubles threaten to destroy their blissful relationship and reunion. Actor Michael Dorman (Apple’s For All Mankind) plays the protagonist as Jesse, a charming but hopeless man who enjoys gambling and playing billiards while spending nights at a dirty, cheap motel. Dorman really took his character role into a heist-pursuing adventurer just for the sake of the character development and the film’s plot. He looks like he is required to have some skills of playing billiards but whatever the cases to fit the film’s dynamics, even with the term “luck” for its title, Dorman is just having fun playing games and learns how to play his cards right. Here, we also have actress Sophia Bush (One Tree Hill, Chicago P.D., and Pixar's Incredibles 2) coming up as Carla, his old girlfriend from the past. Despite receiving her small acting cues and screentimes, she’s got some serious emotional acting as if she is here and there to help make things better for Dorman himself in person as a changed man as well as bringing some strong-fierce chemistry with each other, which adds some points to its film’s genre. She not only knows that this film is romantic, but she knows there’s a lot more than just a romantic movie, it’s filled with serious drama, but in the right way thanks to her acting commitment, the director, and Dorman.

The director of the Hard Luck Love Song is Justin Corsbie. This film marks his first time directing this movie but at least he’s living the dream of working in pictures. With the direction, Corsbie follows advice from several romantic films and drama films to craft his own funny-wacky adventure with Dorman and Bush altogether. He makes the chemistry interesting and intense to study on such love-hate loops for the story and their character developments. While the film is admirable, there are some scene cuts and skips on the third story arcs, giving me some confusing viewing senses to see and understand how the scene flows generously. In addition, there are some darken-drunken moments for both Dorman and Bush as the film’s third act of the story did not follow the simple steps of crafting the romantic film, it’s more like a crime-drama film based on my strong eyes and my sense of hearing. But moreover, he really tries his best to offer what is happening to see, putting his heart, mind, and soul to it.

Hard Luck Love Song is ok, lasting only 104 minutes of that lengthy time. While there’s not many colorful elements being shown in the film, Michael Dorman and Sophia Bush are what makes the film simple to enjoy and extremely brightful for my viewing pleasure despite all the bad language and drug addictions being scattered across the film. I think the director has put too much of those drunken reprobates all over Dorman’s central character. However, I enjoyed their gooey chemistry between Dorman and Bush entirely. I wouldn’t say it’s the best movie, but it’s a gamble between what’s good and bad. Hope when you come across this film, you should watch it if you like, but better proceed with caution when you are very nervous about selecting this flick.

Here's an Audio interview with Director Justin Corsbie in person at the Beeman Hotel in Dallas, TX at 4:30PM.