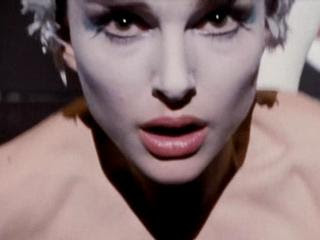 Darren Aronofsky who directed such intense films like The Wrestler, Requiem for a Dream and The Fountain took 10 years to make Black Swan from an unrealized screenplay called The Understudy. He considers this film to be a companion piece to the Wrestler which is also about the rigors of physical discipline and performance. Natalie Portman becomes the awards front runner in the role of the year as Nina Sayers an aspiring ballet dancer in a prestigious company who is tapped for the lead role in the Black Swan.

Tchaikovsky’s familiar romantic overtures sweep over the film as Portman's Nina with paper thin skin over a skeletal frame strain to interpret the music in movement. Nina is obsessed with perfection in her dance and is not responding well to the criticism of the artistic director Thomas Leroy (Vincent Cassel). He selected her because she embodies the innocence of the white swan, but she doesn't quite grasp the wildness of the black swan. Thomas suggests masturbation and lots of it as a way of connecting to her repressed passion. It doesn't help her fragile state of mind when charismatic Lily (Mila Kunis) a newly arrived dancer from San Fransisco who may not be a technically great as Nina, is actually more suited temperamentally as the black swan. It is no surprise that Lily is chosen as the alternate swan queen and who may or may not be sabotaging Nina to take over the role. At home Nina's devoted mother and former ballerina Erica (Barbara Hershey) who smothers her with micro managing maternal pride laced with jealousy. Erica's demented “art” of badly drawn portraits of her daughter is rather creepy. Adding to the continual pressure Nina is under is she had been selected to replace Beth MacIntyre (Winona Ryder) the once headliner. In the fickle world of dance she is considered too old at 40 and is forced unwillingly to retire. Her diva-ish tirades hints to Nina what may be store for her in the future as the new lead dancer. It's no wonder that Nina is experiencing an understandably tenuous hold on reality.

Cinematographer Matthew Libatique fills the screen with the backstage sweat and work of the ballet company revealing the reality of the abuse the dancers endure for art. The camera follows Nina as if seeing it from her point of view from her little girl decorated bedroom to the wood floor and mirrored rehearsal halls to the lonely rides on the NYC subway system. Portman's tortured face reflects the fear and determination that Nina exerts in her performance while she is psychologically spinning out of control. The mood of the film is dark and reminiscent of Polanski's claustrophobic Repulsion. At times it's hard to tell what is real and what is Nina's imagination. However this concept may leave viewers confused rather than intrigued which may be the film's weakest point. Portman who trained for a year before filming has already earned a nomination from the Independent Spirit Awards and will probably earn more accolades. The last 10 minutes of the film culminating with the final performance is like a fever dream and one which will stay with you long after you leave the theater.
(Review by reesa)

Posted by Dallas Movie Screenings at 1:33 AM